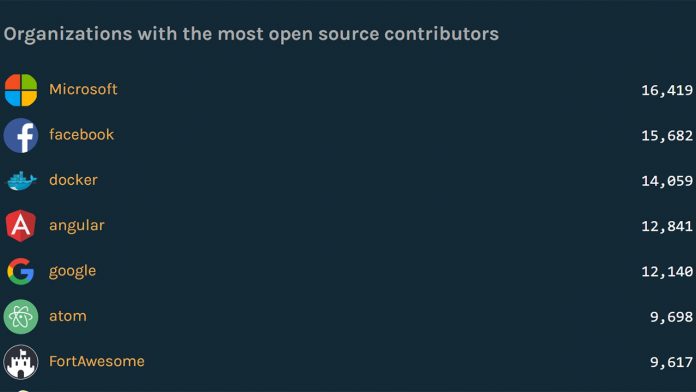 Microsoft’s stance on open-source has changed dramatically under new CEO Satya Nadella. We’ve seen an outpour of projects made public by the giant, from Visual Studio Code to Bing Search components and PowerShell.

Despite this, it’s hard to imagine the traditionally closed-door company as a leader in that regard. However, data from GitHub shows that on one platform they are just that.

The Most Open Source Contributors

Third was docker with 14,059, followed by Angular at 12,841, and Google in fifth with 12,140. In addition to the overall number of contributors, Microsoft’s Visual Studio Code was sixth on the list of most popular repositories.

V S Code has a total of 5,855 contributors, making up a significant chunk of the overall total. The other numbers have trickled in slowly from the variety of projects Microsoft has opened up over the past few years.

Some of the most noteworthy are the Chakra JavaScript engine, the Computational Network Toolkit, and the Microsoft Build Engine.

In total, however, the Redmond giant has 51 pages of sources on the platform, with what must be over a thousand projects. Once you look at the broad range of projects and languages covered, it becomes less of a surprise that Microsoft is ahead of the competition.

Naturally, GitHub also revealed some statistics about their platform as a whole. Out of the 316 programming languages on the site, Javascript is by far the most popular and also grew the most.

Over the past year, GitHub had over 5.8 million active users, 331,000 active organizations and 19.4 million active repositories. It also gained over 5.2 million users, of which 815,000 made their first pull request.

As such, the ranking is a great achievement for Microsoft. It’s a true testament to the company’s evolution over the past few years. As Github CEO Chris Wanstrath tells Fortune:

“To see that all change has been pretty remarkable. It’s real. I think a lot of people were skeptical of Microsoft at first, but they’re real…to see them embrace open source in a real way, my understanding of this company is now different.”