This week, a title called Recore launched. It was not necessarily hugely anticipated, despite coming from the team behind Dead Rising, Mega Man, and Planet. However, Recore is hugely significant because it is the first Xbox Play Anywhere game.

Microsoft first announced the Xbox Play Anywhere feature at E3 earlier in the summer. The idea is an expansion of the Universal Windows idea. It is designed to make the Xbox ecosystem larger and bring in more Windows 10 users into the platform.

Xbox Play Anywhere lets a user buy a game on Xbox or the Windows 10 Store. With this one game they are able to play it on both a desktop PC and on the Xbox One console. Expanding on this idea, it is also possible to sync saved games and achievements between the platforms.

Recore was developed by Armature Studio and Comcept in collaboration with Microsoft Studios, which will serve as publisher.

As we said, Recore is the first title to explore the possibilities of the new feature. This is a third person game in the action-adventure genre. While this is not a review, we will say the game is very solid. It’s fun and has some exciting combat mechanics and a puzzle solving aspect that was enjoyable. While Recore is certainly exciting for gamers, it is what it means for Microsoft’s plans that truly pique the interest. 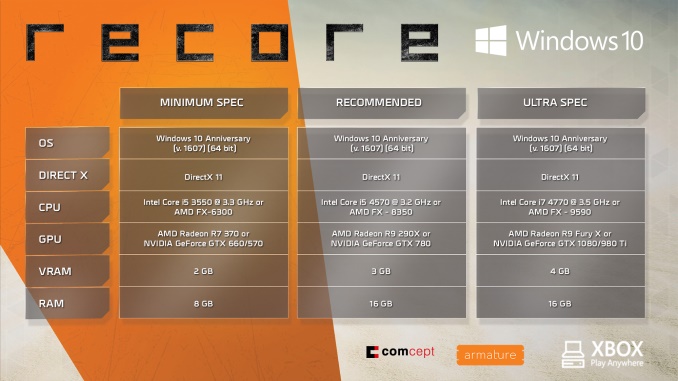 We mentioned in out Xbox One S vs. Sony PlayStation 4 Pro comparison that we think Microsoft is doing more exciting things than Sony at the moment. Of course, Sony has a sales victory all but sewn up. However, features like this are really setting the Xbox platform apart.

Sure, some are concerned that Microsoft’s is trying to create a closed monopoly, but the company is certainly expanding its platform. The Universal Windows Platform is only in its infancy, but it has huge potential.

All early indications suggest that Xbox Play Anywhere works. The feature indeed syncs between two platforms without any issues.