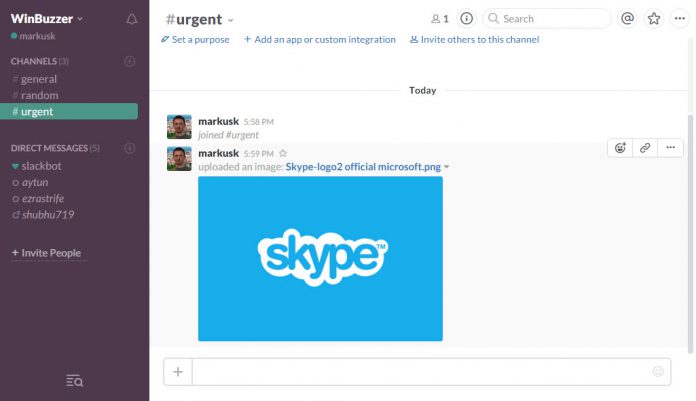 Back in March, reports suggested that Microsoft was considering a $8 billion bid for productivity chat app Slack. However, Microsoft co-founder Bill Gates put an axe in that, as did CEO Satya Nadella.

Instead, Gates pushed to add more features to Skype so it was more competitive as a workspace tool. It now appears that Microsoft has gone down a slightly different route – putting that new functionality into standalone app “Skype Teams.”

Microsoft’s new app will work a lot like Slack, but with some key improvements. According to MSPoweruser, Skype Teams will have the same multi-channel system as Slack.

Within a team, you can have several different sub-sections such as marketing, design, IT, etc. Users can also direct message each other if a private conversation is needed.

However, Microsoft has gone one step further with the introduction of threaded conversations. The feature organizes channels into Facebook-like comment threads, allowing users to pick and choose what they reply to.

Naturally, Skype Teams will let you make video calls, both in a group and privately. You can also share files, notes, images, and video. The file feature comes with Office 365 integration so that customers can access their documents quickly and intuitively.

Judging by the screenshots, the application will let you arrange meetings from within the team interface. Assumedly, this will come with Office 365 calendar integration so that you can work out when people are free.

Additionally, Skype Teams will have a “Fun Picker” button. It gives you access to emojis, memes and gifs to liven up the office experience. These are pulled from popular apps like Giphy and more.

In all, Microsoft’s new app is looking like a very solid competitor to Slack. The company has the advantage of a known and trusted brand name, and the extra features put it slightly ahead from what we’ve seen so far.

In particular, Office 365 and OneDrive integration are things that Slack likely won’t be able to offer because of Microsoft restrictions. Companies will have the advantage of an application that feels like a natural extension of their existing workflow, which may be powerful enough to convince a switch.

The app will come with current Office 365 subscription plans, making it feel like a natural choice. Microsoft has plans to release to them first, then as a standalone later.

Skype Teams is currently in internal testing, with no word on a release date. However, we do know that it will come to the web, Windows, iOS, Android and Windows Mobile.