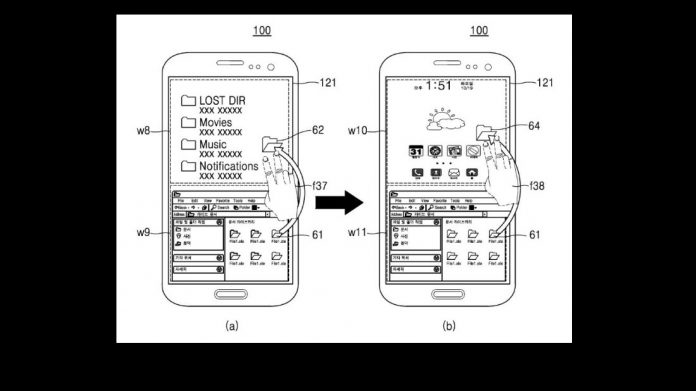 Samsung is the largest smartphone manufacturer in the world. Yes, the company has a diluted device range and has lost sales and profits in recent years. However, if there was one company Microsoft would want building Windows phones, it is Samsung. A new patent for the company may offer a glimmer of hope.

The South Korean tech giant has patented a smartphone that can run both Windows and Android platforms. Of course, this is not exactly a new concept. Numerous devices has been able to run Windows and Android, but Samsung is presenting something different.

In the patent, the company describes a system where the platforms can be swapped quickly. Think of the way you open one app and close it and open another. This quick fire ability to switch between Windows and Android will work like a multi-window feature. Users will be able to run an Android app in one windows and a Windows app in another.

Samsung is expanding the idea further by making the dual platforms linked. For example, it will be possible to drag and drop files between the separate operating systems. Resources can also be assigned to processor cores to save memory use on each OS.

There are some things to pay attention to here. Firstly, this patent is from the start of 2015, and secondly Samsung has not indicated it will develop the feature. Despite the resource management of the patent, it would still need a lot of power. Certainly the movement to 6GB of RAM would need to be complete for a device to competently handle a dual OS platform.

The real question is why this would be worth doing. Samsung, sadly, has no need to offer Windows on an Android device. Many of Microsoft’s services are now available on Google’s platform. In terms of openness, an ideal scenario would be purchasing a device and installing any OS you want. We are not there though and are unlikely to ever be.