While it is common for parents to be worried about their kids online, we don’t often hear how the teens feel. Microsoft has conducted a study that finds teens are actually concerned about personal safety online. Moreover, those surveyed expect web risks to increase in the coming years.

There were 14 countries in the study, including China, UK, USA, France, and India. Below is a list of the 17 online threats the research focused on:

It may be contrary to what the mass media says, but teens are concerned about sexual threats online. The reality is, younger people tend to realize the more potent online threats. They have often been painted as looking for sexual interaction online, but if is actually older users who engage in this more. Teens in the Microsoft study think sexual threats will worsen.

“Results indicate young people are more likely to have experienced or been exposed to “sextortion,” [1] when it happened to them or someone in their immediate circle. (Research shows that especially when surveying youth, respondents are often more comfortable relaying what may have happened to a friend or family member versus the respondent directly.) More than one-third of youth who said they encountered sextortion reported that it happened nearly every time.”

Many teens have been exposed to sexual threats online. Indeed, 44 percent say they have been the subject of a sexual threat. Compared to adults, younger users are also more likely to be harassed, bullied, or subjected to hate speech.

Microsoft points out that higher online interaction is partly responsible for teens being more exposed. The company adds that one of the surprising aspects of the study was that teens are more likely to retaliate or confront harassment.

“Nearly six in 10 (58 percent) of young people said they met their offenders in person compared to 43 percent of adults. Youth were more likely to have been in contact with their offenders when negative behaviors involved online meanness, unwanted contacted or trolling.”

It is worth noting that these a preliminary results. Microsoft says the full results will be made available on International Safer Internet Day 2017 on February 7. 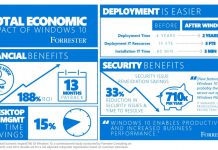 Windows 10 is Cost Effective in Productivity, IT, and Security, Says Forrester Consulting