Android and iOS dominate the smartphone space. However, devices on the platforms are not necessarily the best. Sure, they are crammed with the latest specs, but Microsoft handsets can also do things well. Indeed, a new study shows that the humble Lumia 640 and Lumia 650 are the best smartphones for data signal strength.

An independent study by Professor Gert Frølund Pedersen, from the Aalborg University, looked at 26 handsets. Among the devices were the most popular products on the market. Titled “Mobile Phone Antenna Performance 2016” the report has some interesting information.

As mentioned, the Lumia 640 performed as the best devices in data signal strength. The Lumia 650 sat in fifth place with a trio of Samsung devices (Galaxy S6 Edge +, Galaxy S7 Edge, and Galaxy S7) in between. Apple’s all-conquering iPhone did not perform well, making its first appearance in 13th place for the iPhone 6. 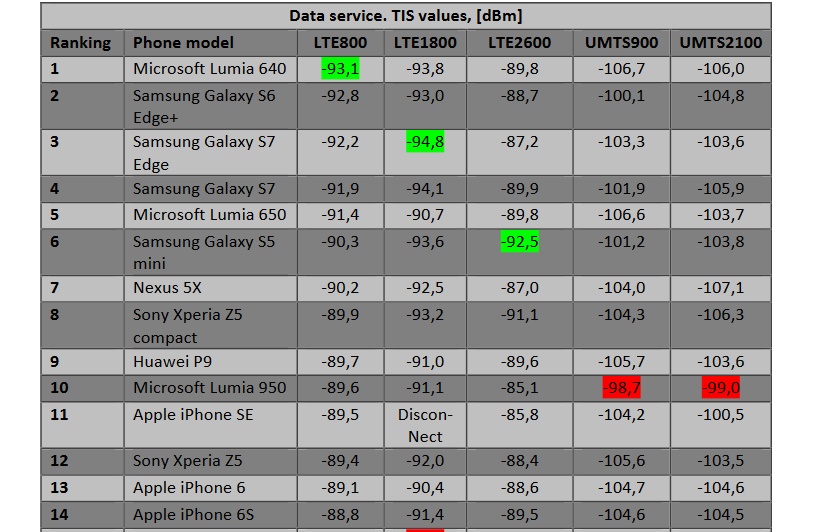 The study also looked into voice service performance in both the right and left hand. Again the duo of Lumia devices performed well in these categories, especially in the left hand. However, both categories were won by other handsets.

Microsoft’s flagship Lumia 950 performed poorly relative to other devices in the tests. So, why can a low end Microsoft device be better in these aspects than a flagship? There are a number of reasons.

Firstly, it is worth noting that the Lumia 640 and Lumia 650 are very much device born from the Nokia brand. They built on existing Nokia handsets after Microsoft purchased the Lumia division. Nokia was always noted and respected for its technical prowess. The Lumia 950 is a ground up device from Microsoft.

However, that does not really tell the whole story. The study points out that it is hard to test devices dual antennas, like the Lumia 950. This means results for these handsets are not 100% conclusive and the researchers needed calculate finishing results. One thing to point out is even the lowest devices in the lists have results that are standard for phones. In other words, there are winners here, but not really any losers.