The latest numbers from Kantar are in once more, detailing the changes for the month of July. The statistics are a mixed bag for Windows Mobile, with gains in the USA but a decline in most European countries.

Compared to June, the OS has risen 0.8% in the USA, possibly due to the price decrease of the Lumia 950 line. Year on year, however, Windows sales share has fallen by 1.4% in that region.

The UK, on the other hand, has dropped by 0.3% since last month’s report, following a 0.2% decrease from May. It appears that many users have opted for iOS instead, which has experienced a growth of 0.8%. 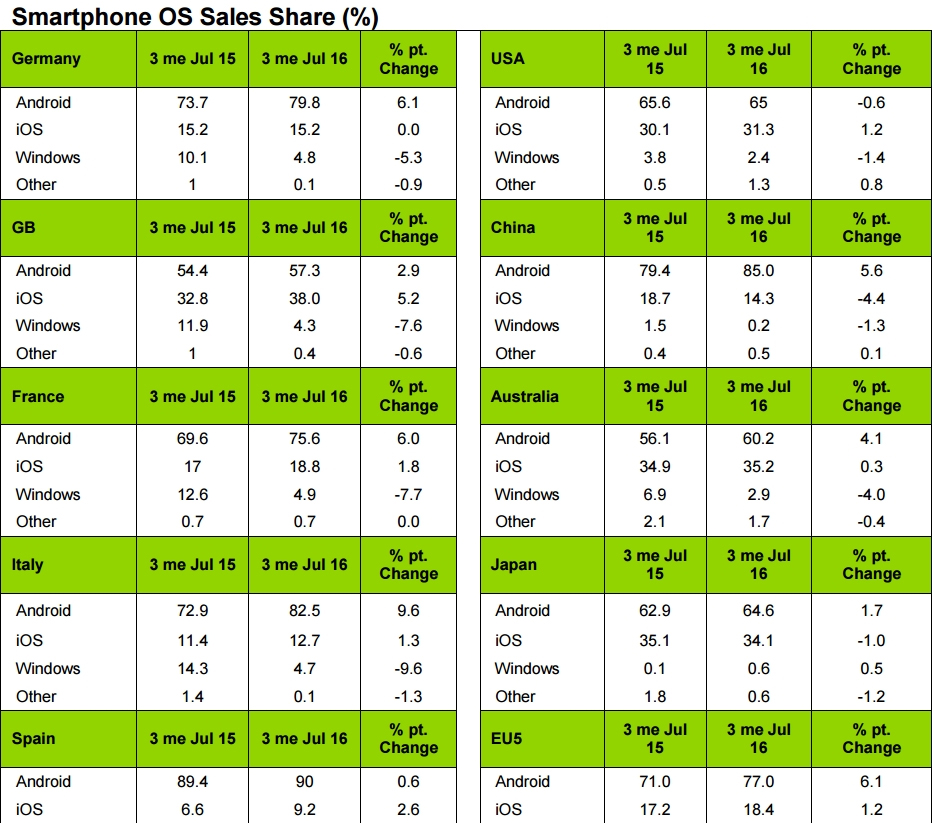 Perhaps surprisingly sales in Japan have increased once again, and market share now sits at 0.6%. In March, Windows Mobile was all but dead at 0.1%, but Microsoft has managed to capitalize on BlackBerry and iOS losses.

Despite the losses in Japan, iOS remains one of the fastest growing operating systems in most regions. In the USA, this means an increase of 0.5% and 1.2% year-on-year.

“The iPhone 6s remains the top-selling device in the market with an 11% share, something we expect to continue through the launch of the next iPhone, with price reductions incentivizing people to upgrade their current phones,” says Kantar analyst Lauren Guenveur.

Interestingly, the iPhone 6 is still the sixth best-selling phone in the region despite nearing the end of its life cycle. It accounted for 4.1% of sales in the latest period.

However, the biggest increase in iOS sales has come from the UK. Sales have increased by 5.2 since last year, making it the strongest growth since the end of the three-month period in September 2015.

You can have a look at the number for yourself on the interactive Kantar world panel, or download the press release.