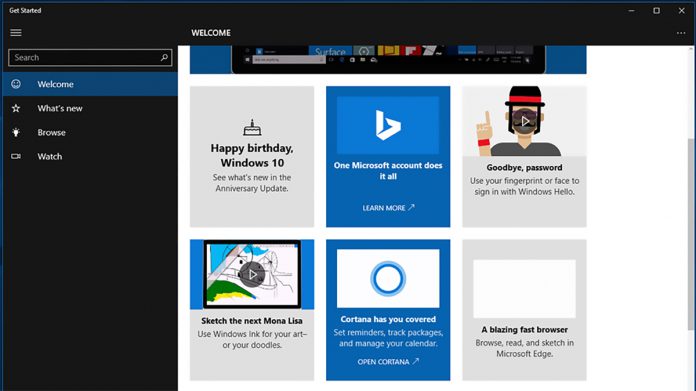 Get Started is an app that is rarely used, but can be invaluable to new users. Microsoft has now updated it to include more information, add new features, and extend the Surface Hub.

The app is pre-installed on all Windows 10 machines, so this update will affect the entire user base of Windows Anniversary. Get Started is notoriously unused to due its lack of discoverability, so this may be what Microsoft needs to entice new users.

The main feature of the update is the addition of new content. Videos on Cortana, Xbox, the Windows Store, Action Center, Microsoft Edge, Windows Ink and more have been added. The update also makes it easier to find app topics by searching the title.

We have listed the full changelog for you below:

The update should help less tech savvy users get to grips with the latest changes to Windows and its devices. Though there’s nothing major here, the small additions will evolve  the support to be more intuitive and accessible to all.

Many of the additions center around the Windows Anniversary Update. As such, the new version is only available to those on build 1607 or higher.

You can get the latest Get Started on desktop, Surface Hub or HoloLens from the Windows Store.