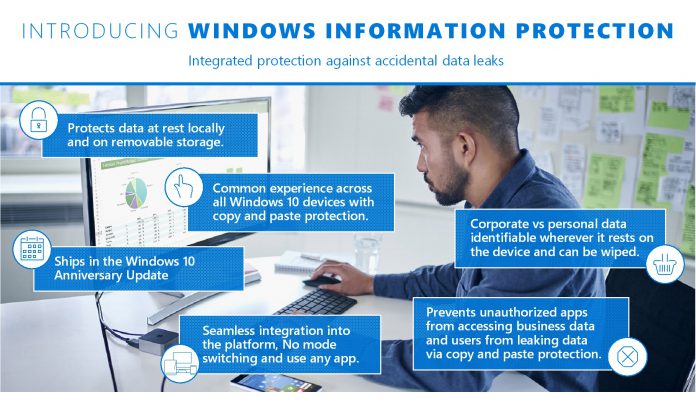 Microsoft introduced a number of new features with the Windows 10 Anniversary Update. Many of them have been much discussed, but some have flown under the radar. One of them is Windows Information Protection (WIP), which comes to Anniversary Update. The service has now rolled out for Office mobile apps on Windows mobile and tablets.

WIP was formerly known as Enterprise Data Protection (EDP) but has been overhauled for the Anniversary Update. Microsoft originally announced Windows Information Protection (WIP) back in June.

The service is in place to stop data leaks from happening accidentally. It also gives users control over their data and how to distribute it. Microsoft described WIP back in June as:

“WIP’s capability is fully integrated within the experience your users are already familiar with, and they can continue to use the apps that they, or IT, choose to access protected content. WIP doesn’t require users to use special folders, change modes, use alternate apps, move into secure zones or partitions, etc. Instead, the solution works completely behind the scenes and helps protect data wherever it lives on the device. It can even continue the protection when data is copied to removable storage devices such as a thumb drives.”

When introducing WIP, Microsoft detailed reasons why the service is important. The company says 87% of senior managers have accidentally leaked important data to personal locations. This means a lot of sensitive data is being sent to unmanaged services like email and cloud storage. 58% say they have sent business data to the wrong contact.

Windows Information Protection makes it easy to avoid making those mistakes. The service does not require admins to use special folders or modes, while they can also avoid using secure zones, partitions, and apps.

By using WIP in Office, users can designate content as “work” or “personal” allowing IT departments to control sensitive data. Microsoft says the service will be coming to Windows 10 desktop soon, but offered no date for its release.