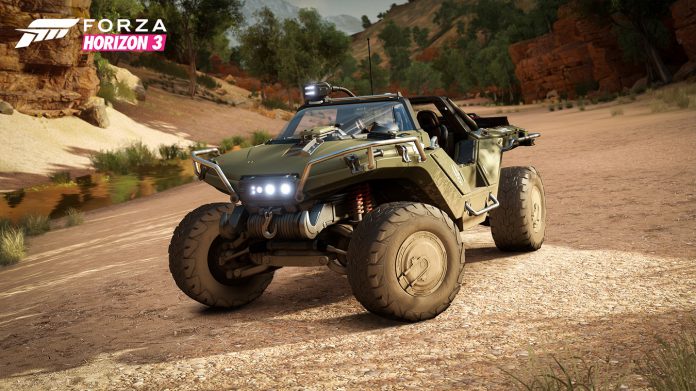 Gamers a hotly anticipating the release of Forza Horizon 3 on September 27. Microsoft announced that the game has gone gold ahead of its launch. The company says it has sent off the game for final disc pressings and the digital release is ready. Now Forza Horizon 3 is good to go, Microsoft has some new surprises, one including a Halo-inspired vehicle.

In an official announcement, the Xbox team says the Warthog from the Halo games will be playable in Forza Horizon 3. The company says that Warthog will be added to the 350+ vehicles that have already been introduced in the Forza Garage. These are all the vehicles that will be available at launch.

The 2554 AMG Transport Dynamics M12S Warthog CST is described as the civilian version of the military vehicle. As Microsoft says, “you won’t find a turret on this version”. The vehicles sports a 720bhp twin turbo V8, so expect it to be rapid in the game. The team says the vehicle is a perfect blend of performance and stability.

If you are interested, the Warthog will be available at launch for those who played Halo 5: Guardians or Halo: The Master Chief Collection on Xbox One. Those gamers will receive a code to download the vehicle via Xbox Live. Those codes will be sent out on September 5, ahead of the launch of Forza Horizon 3.

Microsoft also announced the Xbox Live Achievements available for the game. Among them will be Endurance Hero for a 25 lap race and Best. Horizon. Ever for completing the last event.

You can check out all of the achievements and more photos of the Warthog right here. Forza Horizon 3 will be available on Xbox One and Windows PCs from September 27. Ultimate Edition owners will be able to play the game from September 23.