The continuous race to have the world’s thinnest laptop has a new leader today. Acer has announced the Swift 7 as notebook that takes its position as the thinnest on the market. Indeed, at just 9.98mm, this is the first ever notebook to be under 1cm thick. The company also announced a range of Swift laptops to accompany the 7.

HP released the Spectre earlier in the year, the thinnest laptop at 10.4mm. The Swift 7 trumps it with its first-of-a-kind thickness. Whatever you think about this race, it is an amazing feat on Acer’s part to make this device less than 1cm thick.

The Swift 7 is also a classy looking notebook with an all-aluminum unibody with a black/gold dual-tone color. It sports a 13.3-inch IPS display with Full HD resolution and a coating of Gorilla Glass to add scratch resistance. This portable notebook looks good and that thinness means it only weighs 1.1kg. 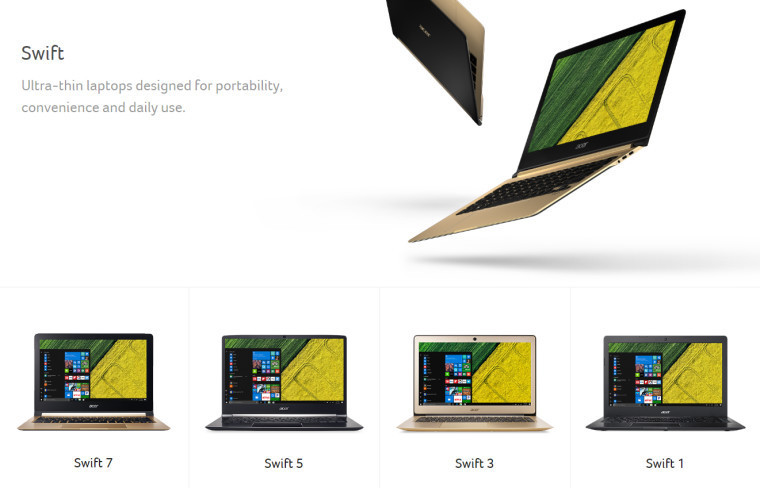 Speaking of hardware, the Swift 7 boasts a 7th-generation (Kaby Lake) Intel Core i5 processor. The chip has been coupled with 8GB of RAM and storage is taken care of by a 256GB SSD. There are two USB 3.1 Type-C ports for the fastest connections. Acer says that the battery is big enough to keep the lights on for 9 hours.

The solid specifications and unique design mean the Swift 7 will be a premium machine. It will cost $999 when it lands in North America in October.

Acer also took the wrappers off a whole Swift range:

A 14-inch display with Full HD, this is a notebook with a 7th-gen Intel Core i7, 256GB/512GB SSDs, RAM configuration up to 8GB. There is also a USB 3.1 Type-C port and 13 hours of battery life. Acer also offers options for a fingerprint scanner and touchscreen.

A more modestly prices notebook is the Swift free. This is another 14-inch laptop with a number of configuration offers. Customers can choose between a HD and Full HD screen and a 6th or 7th generation Intel Core chipset. Up to 8GB of RAM is available, which a 512GB SSD will handle storage duties. This computer is 18mm thick and weighs 1.5kg.

The baby of the Swift range, this is an entry level offering from Acer. It comes with an Intel Pentium or Celeron processor and 4GB of RAM. The 14-inch display is HD and storage configurations include 32GB/64GB/128GB.