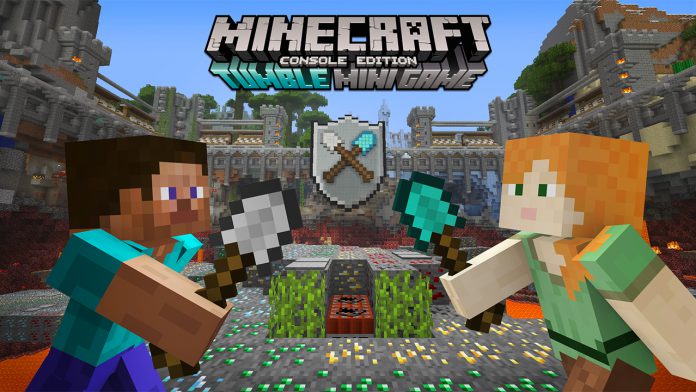 Mojang’s Battle mini-game went down well with fans, and they released their second map pack DLC last month. Now, further collaboration between Microsoft and Mojang has resulted in another pack, as well as an entirely new game mode.

“Tumble” pits eight players against each other in an arena suspended over lava. They have to knock the ground out under their opponents feet using shovels and snowballs in a bid to be the last man standing.

The concept may sound familiar, and that’s because it was invented back in the early days of Minecraft. PC users have been playing “spleef” for a while, but there’s never been an easy way to reset on console.

Now Mojang is taking care of all the tedious work for you. Tumble automatically fills in the holes in the arena and even keeps score of who has won. The maps are semi-randomized to ensure things stay fresh, and users can choose between a snowball or shovel mode.

Starting today, console owners can also get their hands on three new Battle maps. As usual, this will cost $2.99 or the equivalent.

The first map features a huge castle, complete with interiors and gardens. The second is named “Invasion,” and takes place in a city half-destroyed by aliens. “Shipyard” may not be exactly how it sounds, Mojang opting for airships rather than the traditional sense, in a floating keep.

These maps bring the total to nine, which should be more than enough variety for the majority of players. No doubt the Minecraft team are working on even more to keep with what seems to be a monthly release schedule.

Console players should have been prompted to download the update already, if not very soon. It will include the new Tumble mode, but you’ll need to head to the Microsoft Store to get your hands on the new maps.