Microsoft’s Bing continues to make inroads into the desktop search marketplace, especially in the United States. The latest data from ComScore qSearch shows that Microsoft Sites has increased its market share in the US. Sure, the increase compared to June was a small 0.1 percent, but Bing now holds 21.9 percent of the market.

Google Sites (Search) remains the runaway market leader. The most popular desktop search engine accounted for 63.4 percent of the explicit core searches market. However, the data shows that Google lost ground in the US again, dropping 0.4 percentage points through July. 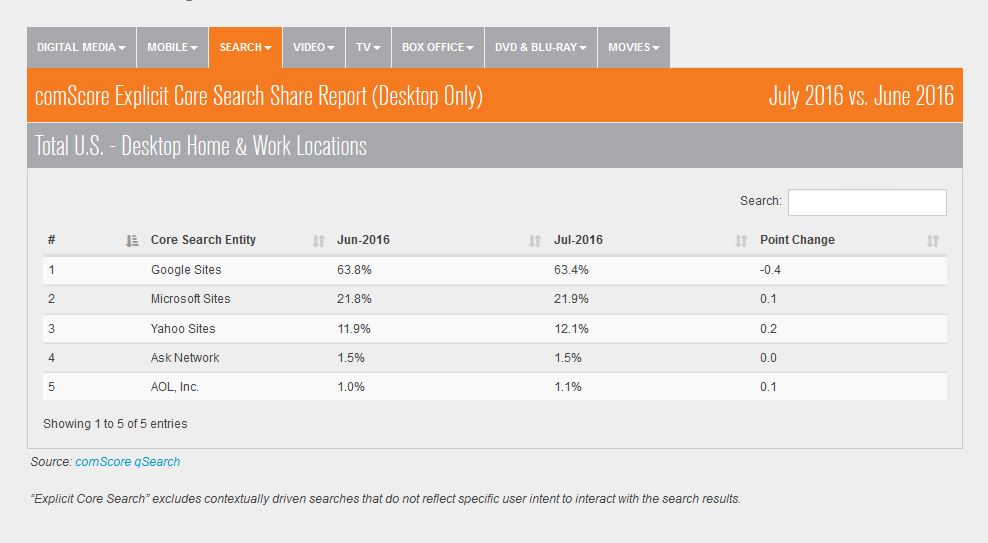 In terms of numbers, 3.3 billion searches were conducted on Microsoft Sites during July. That figure contributed to 15.2 billion explicit core searches overall, a 5 percent volume drop since June. Google Sites accounted for 9.6 billion of these explicit searches.

While Bing has not been a runaway success, it has slowly grown into a viable Google Search alternative. Microsoft has steadily improved the service over the years and consumers are responding. Bing’s performance globally is a little more static, but Microsoft has enjoyed success in its homeland. It certainly seems that Google’s search monopoly is no longer a closed door.

Some of the core improvements Microsoft has made recently include improving its Bing Maps service. The company has also consistently shown the power of Bing, such as with horoscopes and the Image Graph feature. Indeed, Microsoft’s enhancements have been frequent. You can check them all out right here.