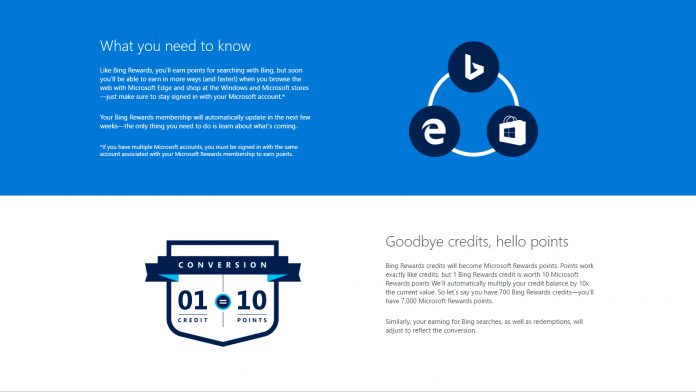 Microsoft first announced its plans to rebrand Bing Rewards a couple of weeks ago, and now the rollout has begun. Users are seeing notifications in Action Center under the “From Microsoft” banner informing them of points gains.

This is a new feature of the service, and clicking on them takes users to a new Rewards tab on the Microsoft Account homepage. Supersite Windows first noticed the pop-up after purchasing an app from the Store, but it’s unclear how long it will take for everyone to get the new version.

For those who missed the announcement, the rebranding comes with a number of changes to the system. Foremost are some new ways you can credits, now named “points.” Users can now get points by using Edge, as well as buying products from the Windows and Microsoft Stores. You will receive one point for every dollar spent.

Member Tiers have also been revamped, moving from “Member, Silver, Gold” to Level 1 and 2. Those with an account already will get boosted to the highest membership level for a month. Naturally, the tiers come with new requirements.

To get to the highest level previously you needed to earn 750 credits and search Bing 150 times a month. Microsoft has done away with the search requirement now, just requiring 5,000 points monthly.

It’s worth noting that points are calculated as ten times more than credits. An existing credit balance of 30 would now be worth 300, for example. This means that though 5,000 seems like a lot, it’s actually far less than before.

The amount you get for searches scales with this, and you get 10 points for every two Bing searches, for example. The referral system is currently disabled so you won’t be able to earn points that way. However, Microsoft has plans to open it out in the future as they expand into other countries.

If you’re not yet a member, you can sign up for Bing Rewards here. You can also learn more about the upcoming changes by visiting the new Microsoft Rewards website and the FAQ page for more in-depth explanations.