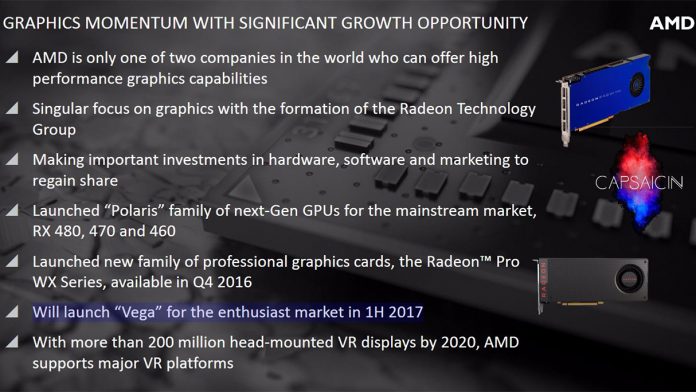 AMD released its RX graphics cast series last month, with an almost unparalleled performance to money ratio. However, those looking for a little more power have been eagerly awaiting Vega. Now the company has confirmed an official release period.

Rumours from AMD employees suggested a release date of October 2016, but hardware enthusiasts will be disappointed to hear that it will be much later than that. Vega won’t arrive until January to June 2017.

The information comes from AMD’s roadmap to investors, so it’s still possible that the company will still push the release forward to surprise the press.

A leaked email suggests that the GPU will have up to 32 GB of HBM2, using a 14nm FinFET design. This makes it more architecturally advanced than Nvidia’s Pascal cards, and the memory will offer vast improvements over any of their current hardware. Here are the full expected specs:

GPU Transistors: Up To 18 Billion

AMD’s Zen CPU is expected to show up late 2016 or early 2017, so it’s possible that the company is planning on a dual release. This would open the possibility of new high-end systems running solely on AMD, and could net them a decent amount of sales.

However, it’s possible that Nvidia will be able to push out its 1080Ti card before then. According to WCCF Tech, the card will be powered by the GP102 core. This will offer some very impressive performance that could compete.

Sources who are familiar with the matter believe the card will have 16GB HBM2 or 16GB GDDR5X memory, alongside a 16nm process node. Some of the information is yet to be confirmed, however, so there may still be some surprises ahead.

Whatever the case, AMD is looking like a much bigger competitor than it has been in previous years. You can keep track of the situation as it develops here.