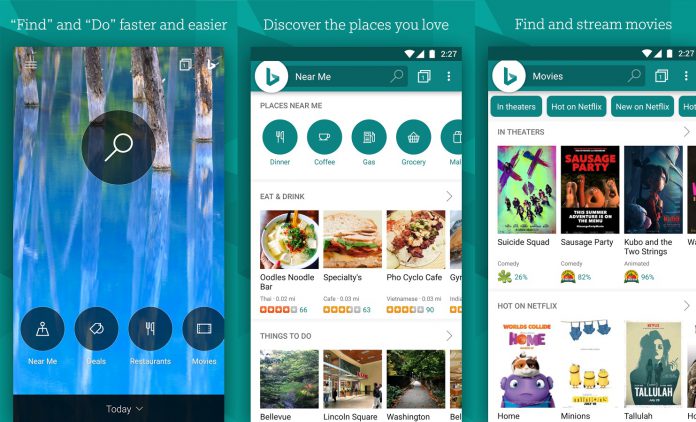 Microsoft has released a substantial update for the Bing Search app on the Android platform. The latest upgrade adds new functionality and improves the overall performance of the search engine. Among the new additions are improvements to camera search. Also arriving with the release is added functionality for music and video search.

With this update, Microsoft is clearly bolstering the abilities of the Bing Search app to deal with media searches.

In terms of music requests, Bing will search for a song that is playing and play the video along with the lyrics. A ‘Music’ shortcut has been added to the homepage to make finding artists and songs easier.

Microsoft published the changelog for the update on the official Bing Search app for Android page:

“Music: Search for a song that’s playing (or just type the name of a song), then play the video while following along with the lyrics. Also, with the new Music shortcut on the homepage, it becomes even easier to get into trending songs, and discover trending artists.

If you are unfamiliar with the Bing Search app on Android, it is worth checking out. The service can search online, across apps on the device, and content on the device. According to Google’s vague download stats, Bing has been downloaded between one and five million times on Android.

Bing consistently trails Google Search by a wide margin around the world. However, Microsoft has worked hard to enhance the engine and make it a truly viable alternative. It has worked in some markets too, especially in the USA. However, on Android, Bing is a tough sell considering it is Google’s home turf.

By adding more features and functionality, Microsoft can continue to take the fight to Google. The truth is, mature Bing is a very good service.