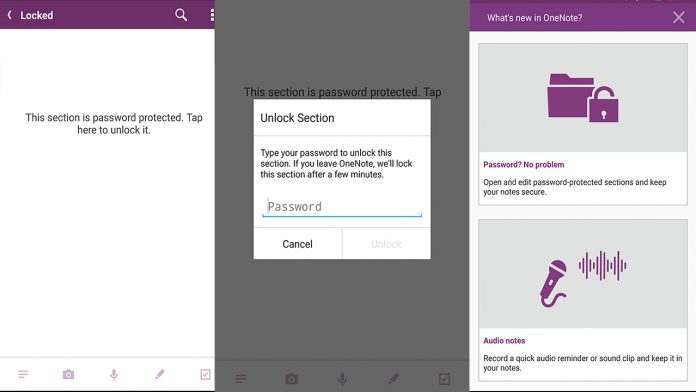 Of the suggested feature improvements, the ability to open password protections came out most popular on Android. With 1,417 votes, it’s been highly requested, and Microsoft has now implemented the feature in the latest update.

In previous builds trying to access password protected sections would pop up with an unsupported dialogue. Now, as of 16.0.7.7341, they work as you would expect. You tap on a section, and it asks or a password before you can edit. When you leave it for a while, it locks again.

The second most requested feature was Arabic support inside pages at 659, and the third edit and undo buttons. The team hasn’t added either of those in this update, but it’s possible they’re in the works.

Aside from that, Microsoft has added a number of other features. OneNote now supports audio recording; auto correct now works on Google keyboard, and you can insert embedded files. The full changelog is below:

It’s worth reiterating that this functionality is only available for beta testers.

If you’d rather stay on the most stable version, then the feature will probably roll out to the public soon. There are no known issues with the build, so in all likelihood, it’ll be here within a week or two.

In the meantime, you can keep an eye on the latest OneNote news here.