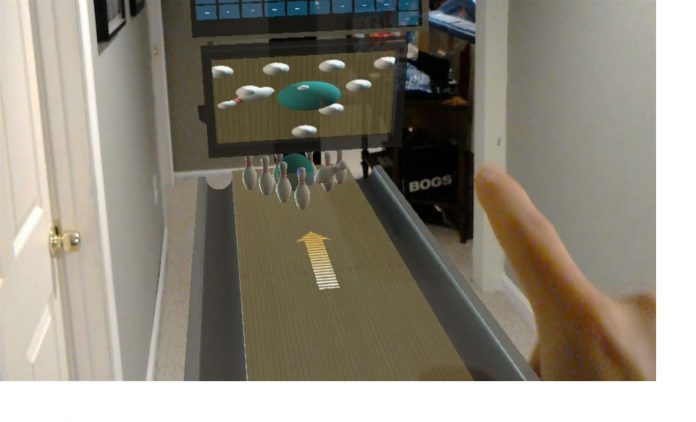 Considering HoloLens is still in a preview phase, it is an impressive device. We are only starting to see what the augmented reality headset can do. However, already the applications and potential of HoloLens are hugely impressive. You can now add the new game HoloBowl to the list of “wow, this is cool” moments Microsoft’s device excels in.

The title has been released by developer Joe Hutchings on the Microsoft Store. HoloBowl uses the headset to allow users to have some fun with bowling. As this is HoloLens, it takes the concept to a new level. Essentially, the game turns your actual environment into the bowling lane.

Of course, this is the clear distinction between augmented and virtual reality. HoloLens changes your environment and lets you interact with it. Virtual reality places you in a constructed environment. Both are immersive and impressive in their own way.

HoloBowl can be played anywhere, in a hall, room, or outside. The developer of the game, Joe Hutchings, says:

“Experience the thrill of bowling anytime, anywhere with HoloBowl! The first fully holographic bowling game for the Microsoft HoloLens. Setup your lane, aim your throw and take a shot! Hone your skills and shoot for your own high score!”

More features will be coming to the game in the near future, Hutchinson says. Among them will be multiplayer support (surely essential for a bowling title) and customization for balls and environments. The game is available now through the Windows Store, priced at $0.99 as a special 12-day price. After the introductory period, HoloBowl will cost $1.99.