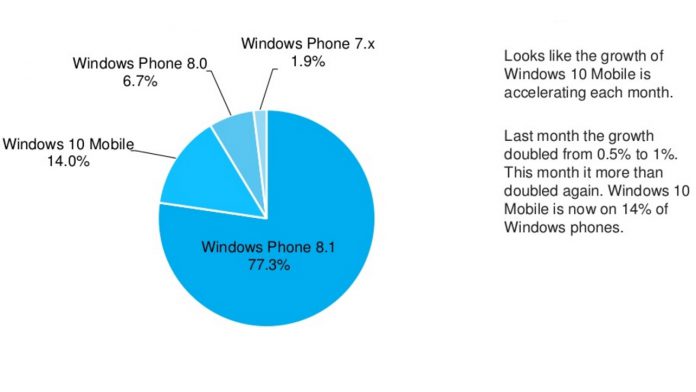 When Windows 10 mobile released earlier this year, the numbers weren’t looking good. In March, AdDuplex reported only 7.7% of users were on Windows 10.

Thankfully for Microsoft, numbers have continued to grow since then. This month’s report is no different, revealing that the user base has risen 2.1% since last month. This means the rate of growth has doubled once more.

Worldwide usage of the Lumia 535 has risen once more, widening the gap between the device and the Lumia 520. It remains the most popular Windows Phone at 12.3%, versus the 520’s 10.4%. AdDuplex predicts that next month it may lose the second place slot to the 640.

In the PC market, only 16% of users have adopted the anniversary build, despite it coming two weeks before mobile. 77.2% of users are still on the previous build, and this may be partly due to the widespread webcam issues.

Additionally, only 0.6% of users have opted into the RS2 Insider build. This is likely to increase as more desirable features are added and the settings issue is fixed.

Despite the disappointment on desktop, Windows 10 has had a good month overall. The word is definitely spreading about the platform on mobile devices, and many that have upgraded are passionate enough to try an Insider build.

It would only make sense for the rate of adoption on both mobile and desktop to grow as more find the time the update and bugs fixes roll out.

You can view the AdDuplex report for yourself on Slideshare.