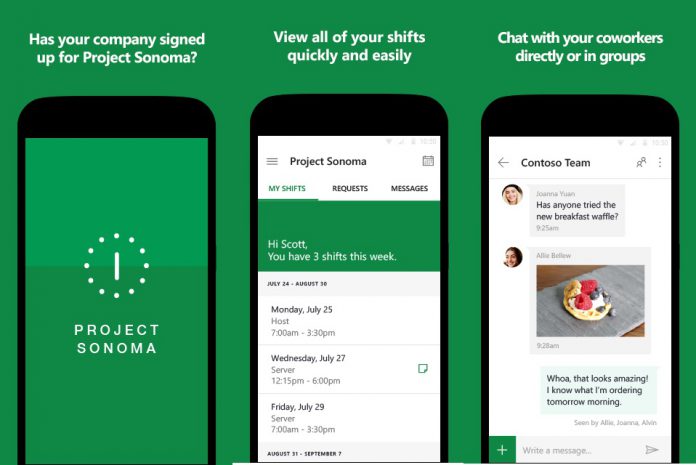 Microsoft is pushing its cross-platform development with the acquisition of a new startup. While the company has announced nothing official, it seems to have bought “shiftr”. A new app launched on Android called Project Sonoma has appeared published by Microsoft. It is an updated service based on shiftr’s previous release.

Project Sonoma is a productivity-minded app that is oriented towards desk-less workers. The service is a combination between task setters like Trello and business chat services like Slack. Users can schedule work, see information, interact with teams and contacts, and allocate tasks.

While Microsoft already has a Slack rival in Skype, Sonoma is different. For a start, it is not oriented towards office or IT workers. Instead, it is more focused for service professionals. The app is current in Private Preview, so its complete feature set is not in place.

Indeed, the preview is only available to businesses who have signed up to have previews. If you are not able to get the app now, there is a waitlist open. Microsoft will inform those on the waiting list when the app becomes available for download.

Shiftr is the startup company that was behind this application. The company was founded by Ludek Dolejsky and Adrian Dean and is listed in the app ID. Microsoft seems to have bought the company as the startup has now disappeared.

Microsoft is really pushing its services on Android. In fact, the company is easily one of the biggest developers on Google’s mobile platform. That will likely frustrate Windows phone users who continue to see the platform miss out on services such as Project Sonoma.