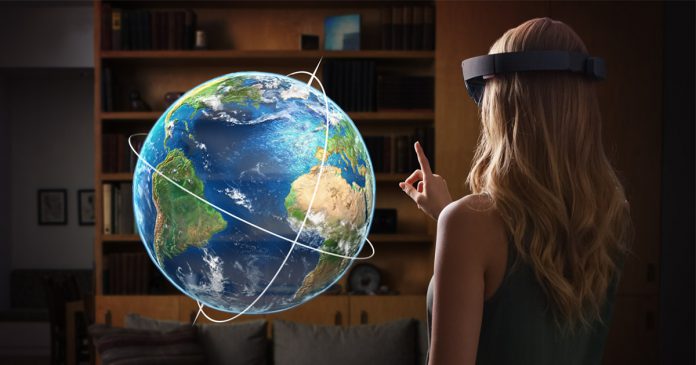 At this point, almost the entire tech industry is getting behind VR and AR. At Gamescom yesterday Lenovo revealed two VR ready Windows 10 PCs. Nvidia also announced their participation with its new mobile graphics cards.

Of course, Microsoft has its own HoloLens project, but at the Intel Developer Forum yesterday they took things one step further. The company revealed a vague release date for their holographic shell.

Windows Holographic is essentially a framework that gives manufacturers access to Microsoft’s virtual version of Windows 10. The shell blends 3D and 2D applications to bring UWP applications to VR, AR, and MR.

The promo video shows its compatibility with Intel’s NUC PC, controlled by a touchpad remote. The company states that the demo was running at 90fps on tiny and inexpensive hardware.

Microsoft first announced the shell in June, but this is the first time we’ve seen it running entirely in virtual reality, rather than mixed reality. The companies also took the opportunity to announce a new partnership.

The tech giants are collaborating on a specification for headsets and mixed reality ready PCs. This will open up to hardware manufacturers so that they can build a variety of devices that support the new experience.

What exactly the spec entails is not yet known, but more details will be coming at the WinHEC conference in December.

The market for virtual reality is supposed to be 80 million devices by 2020. However, Microsoft’s influence could bring an environment where they don’t have to compete for a monopoly.

A single, shared platform built on the innovations that came with HoloLens would allow users to collaborate in real space regardless of if they are on the Rift, Vive or Gear VR.

They are working with tons partners, including Intel, AMD, Qualcomm, HTC, Acer, ASUS, CyberPowerPC, Dell, Falcon Northwest, HP, iBuyPower, Lenovo, MSI and more. The functionality will come as an update to all Windows 10 PCs next year, giving over 300 million devices mixed reality capabilities.