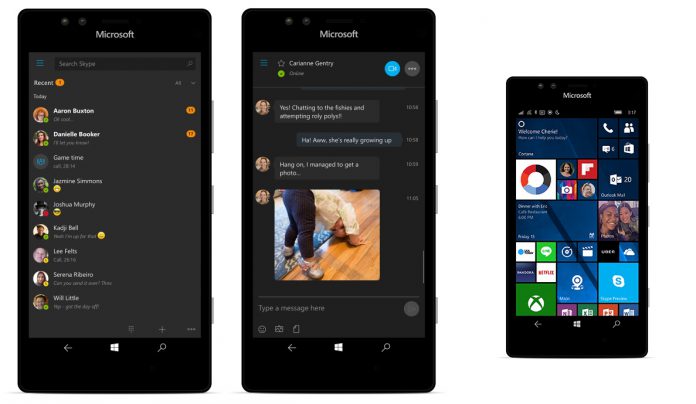 As we mentioned earlier today, Microsoft launched the Windows 10 Mobile Anniversary Update. The release brought plenty of significant changes to the platform. Among them was the arrival the Skype Preview application on Windows 10 smartphones.

The Skype team talks about the release in an official blog today. Discussing the app, the team points out that the Skype Preview has been redesigned from the ground up. Indeed, this is quite an important release from Microsoft.

Skype Preview is a Universal Windows Platform (UWP) app. It is arguably the most significant UWP app to date considering Skype is a major service. The Universal Windows concept means apps will function equally on Windows 10 across mobile, PC, HoloLens and Xbox.

In terms of Skype, the preview app is also the reunification of the service. Microsoft had inexplicably decided to separate Skype services across Windows apps. The decision was almost universally disliked by users. The company reversed the error earlier in the year by announcing the Skype Preview. As the name suggests, this is still a preview, but it is fleshed out.

Accessing the app is as easy as finding it in the app list or directly from the tile. Of course, the app is only available to Windows 10 Mobile users running the Anniversary Update. Existing Skype users will see their existing apps replaced by the preview. The company talks about familiar features in its post:

“You’ll see your Skype conversation history where you can talk face-to-face on a call, message your friends in an instant to share photos, and send emoticons and Mojis to liven up your conversation.”

“Get together with 1 or up to 24 of your friends and family on a video call. Watch everyone’s smiles and cries when you tell them “We’re engaged!!!” To date, Skype is the only communications app that lets you make group video calls from your mobile phone—Skype lets you talk to people on phones, tablets, PCs and Macs.”

Skype Preview is built into Windows 10, something Microsoft says places it above rivals. Most notably because users can reply to messages directly in the notification center without opening the app. The service has also been given an aesthetic overall. This UI change has been made to match Windows 10, but users can revert back to the “Light theme” is they choose.