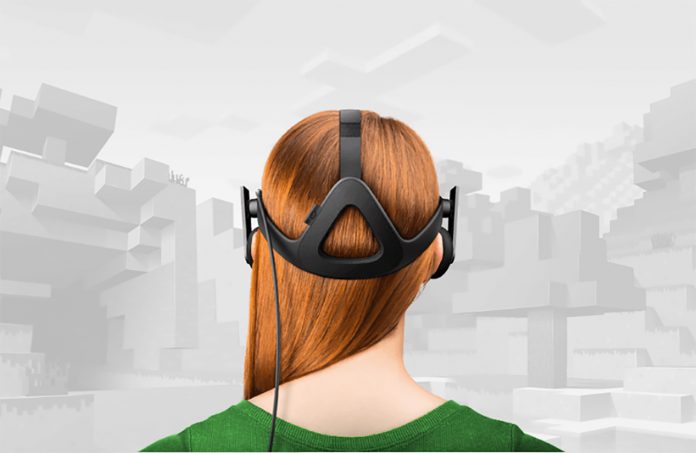 Last month, we reported that Rift support would be coming to the Minecraft in just a few weeks. Today, we’re happy to announce that Microsoft has made it generally available. The update should have begun rolling out to Windows 10 users already.

Entirely free, the release optimizes the game for the VR in many ways, beyond the simple ports for Java clients. It comes from a partnership between Mojang, Microsoft, and Oculus.

With room-scale immersion comes a big problem: tiredness. Moving your head and waving your arms around isn’t always what you want to do in a casual environment. To combat this, the team has added virtual living room support.

The feature lets players jump back out of the game and play through a fake television. It should also help solve some of the motion sickness fans had been reporting in the unofficial version, as they won’t have to turn around.

Building on this, the developers have changed the way characters turn. Rather than moving in a smooth arc, you now move in snappy increments. This will reduce sickness further, but can be toggled if you don’t like it.

Changes to the way you run, jump and walk have also been made. The actions should now feel smoother in VR, as will digging, the cursor now sticking to blocks so you can look around.

Direct X 11 performance has been optimized even further in the build to augment the experience, and MSAA and extra render distance settings mean that it will look better than ever before.

“We’d like to welcome you to the game all over again, because it’s a fantastic new experience in VR, even if you’re a Minecraft veteran,” said Mike McGrath, Minecraft AR/VR developer, “For new and experienced players, we hope the VR experience in Minecraft: Windows 10 Edition Beta will illuminate just how powerful, evocative, and utterly immersive VR can really be.”