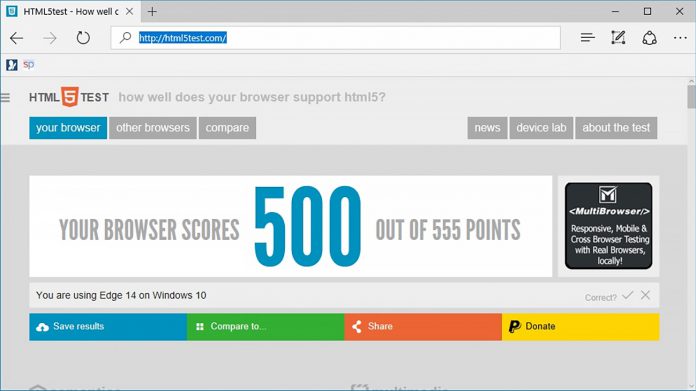 The Windows Anniversary Update came with some significant improvements to Edge, but it appears Microsoft is not finished quite yet. The build number is now at 39.14901, and with the increase comes a better HTML 5 benchmark.

Microsoft’s Edge now scores 500 out of 555 points on HTML5test, rather than the previous 466. The functionality comes as a part of Build 14901, which came to the slow ring last Thursday.

The jump in score is due to a series of features that ship with the latest development version of Edge. You can test them out for yourself by editing the about:flags page in your browser.

You will notice a few changes there:

Web RTC: Changes also come to the WebRTC section, where you can enable WebRTC 1.0. Web real-time communication is a standard that allows voice, video, text and file sharing without the need for additional extensions.

Service Workers: This gives Edge an array of new features, including better offline experiences, background, sync, push notifications and more. Usually, these services would require a native application, so it’s great to see it built in.

Fast Networking: You can now select fast networking in options, allowing you to enable fetch based network stack, which was written to allow coding to cross-platform abstractions.

The opt-in features allow Edge to surpass Google Chrome’s 492 in the performance benchmark, making it one of the fastest HTML5 browsers around. If you’re on the latest Insider build then you can run the test yourself, but don’t forget to do the following:

Let us know what you think of the new features, and keep updated with the latest Redstone 2 builds here.