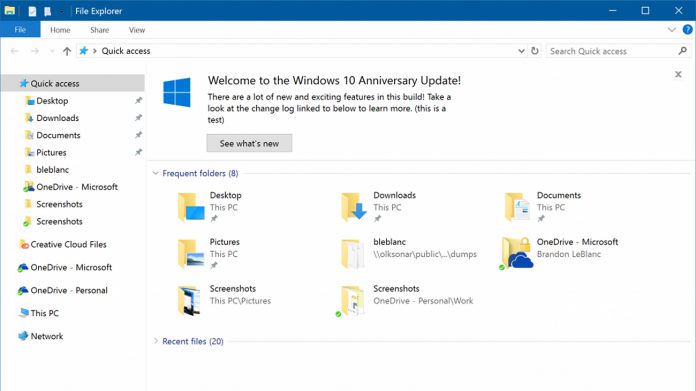 Earlier in the week, we predicted that the first Insider preview build for Redstone 2 would come late this week or early next. Microsoft has gone for the earlier release, and build 14901 is now available to those in the fast ring.

14901 follows the release of the Windows Anniversary Update last week and comes with a minor addition straight off the bat: File Explorer Notifications.

More details about the feature are listed below:

“Improving Product Education: As part of an effort to explore new ways of educating our customers on features in Windows 10 – we are testing out new notifications within File Explorer. They’re designed to help customers by providing quick, easy information about things they can do or new features they can try to have a better experience with Windows 10. If you want to opt out of these notifications, you can do so by unchecking ‘Show sync provider notifications’ from the Options menu in the File Explorer View tab.”

Other than that, the Windows 10 team have been working on improving OneCore. Windows Insider head Dona Sarkar describes it as the shared heart of Windows.

“We’re doing some code refactoring and other engineering work to make sure OneCore is optimally structured for teams to start checking in new features and improvements in a few months, she says, “As a result, these builds may include more bugs and other issues that could be slightly more painful for some people to live with.”

The bugs do extend to this build, with some issues that could be deal breaking for some. If you need some of the missing functionality, Microsoft recommends that you move to the Slow ring.

Here are the two problems with the build:

Kernel debugging probably won’t be a problem for most casual users. Adobe Acrobat Reader is more widely used, and could become an issue. However, other PDF readers such as PDF Lite may work just fine.

That’s it for build 14901, but Sarkar also reassures that they are working hard to get Windows 10 Anniversary out to mobile devices. There’s no official release date of yet, but she says it’s “almost ready.”