Azure users can now continuously monitor Analytics queries through Visual Studio Application Insights in the Azure dashboard. Microsoft announced the feature this week. The launch means customers can create a dashboard to monitor performance or web service in Azure. In its announcement, the company says complex analysis from Visual Studio is possible.

App analysis is important for gauging application performance. Details such as who is using the app, location, and other data metrics are important for developers. Visual Studio Application Insights have become a valuable tool for dev’s. However, it can be a frustrating prospect, but the new Azure integration makes it much easier.

In its announcement blog, Microsoft discusses an example of how Application Insights in Azure work:

“Let’s suppose you’d like to track what percentage of requests your website completes within two seconds. You’re only interested in the most popular pages. This is not difficult to write as an Analytics query, but it certainly isn’t offered as one of the standard metrics.

Until recently, you could only run the query in the Analytics window, and you’d have to click Go at intervals to keep the chart up to date. But now you can include it in a comprehensive dashboard of your system telemetry.” 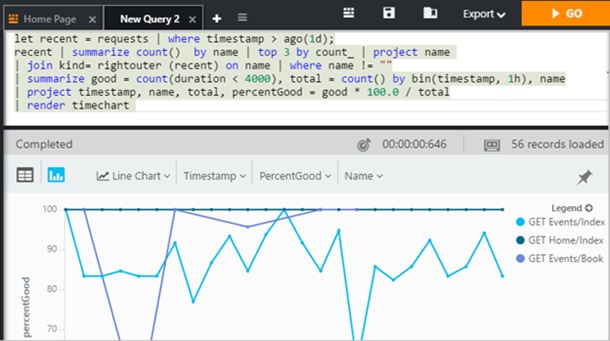 Users will be able to create multiple dashboards. This allows dev’s to check many apps at once, or see the front and back ends of application. It will be possible to share a dashboard, while it also possible write and test queries.

Last month, Microsoft announced a number of enhancements for its Visual Studio Application Insights. Emails are now more detailed, while portal views were also upgraded through the email or the application’s overview blade.

Microsoft Entra Arrives as a Suite of Identity Products