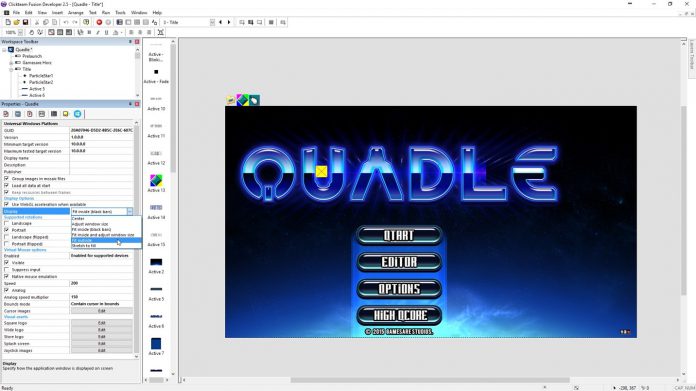 Developers are now getting a new way to create 2D apps and games for the Universal Windows Platform (UWP). Clickteam has announced that it is releasing its UWP Exporter for Clickteam Fusion 2.5 for developers. The software lets dev’s create apps and games on Windows 10 with no coding and a “simple mouse click.”

Clickteam Fusion 2.5 makes the creation of cross-platform content easy. The integration eliminates coding, so no programming knowledge is necessary. Microsoft announced the release on the Windows Blog, and says the software takes an hour to learn the basics. Fusion 2.5 uses a drag and drop interface and visual programming.

Developers can create 2D game content such as side-scrollers, action titles, and puzzle games. A graphics editor lets creators import their own graphics or select pre-made files from the Fusion library.

Coupled with the UWP Exporter, Fusion projects can be ported to Microsoft’s Visual Studio. Developers can test the app or game across Windows 10 Devices in Visual Studio. As this is a Universal Windows system, users can test on PC, mobile, and even Xbox One:

“The UWP Exporter also includes features such as hardware acceleration, joystick-powered virtual mouse support, HTML5 and more. Xbox Gamepad support is also set to be supported in the future.”

Clickteam Fusion 2.5 is available as a free limited version download, while the full version can also be bought directly. Microsoft says the company also has a developer version with exclusive features like run-time licensing agreement. The UWP Exporter is required for all developer versions, as is Visual Studio.

For those creating UWP content with the Xbox One in mind, an Xbox developer account is necessary.