We’ve kept a close eye on the Kantar statistics as we watch an overall decline in Windows Phone market share. The statistics for May revealed a return to growth in the USA, while sales in Europe fell.

The results for June are now out, and they’re a mixed bag. Market share in the US has remained stable at 1.6%, while many regions in Europe are still declining.

Italy is one of Microsoft’s best markets for the Windows Phone and has fallen from 6% to 5.6%, down 0.4%. Likewise, sales in the UK and Germany have fallen by 0.2%. The only positive news coming out of Europe is an increase of 0.2% in Spain, up to 0.4% total. France has remained stable at 4.1% market share. 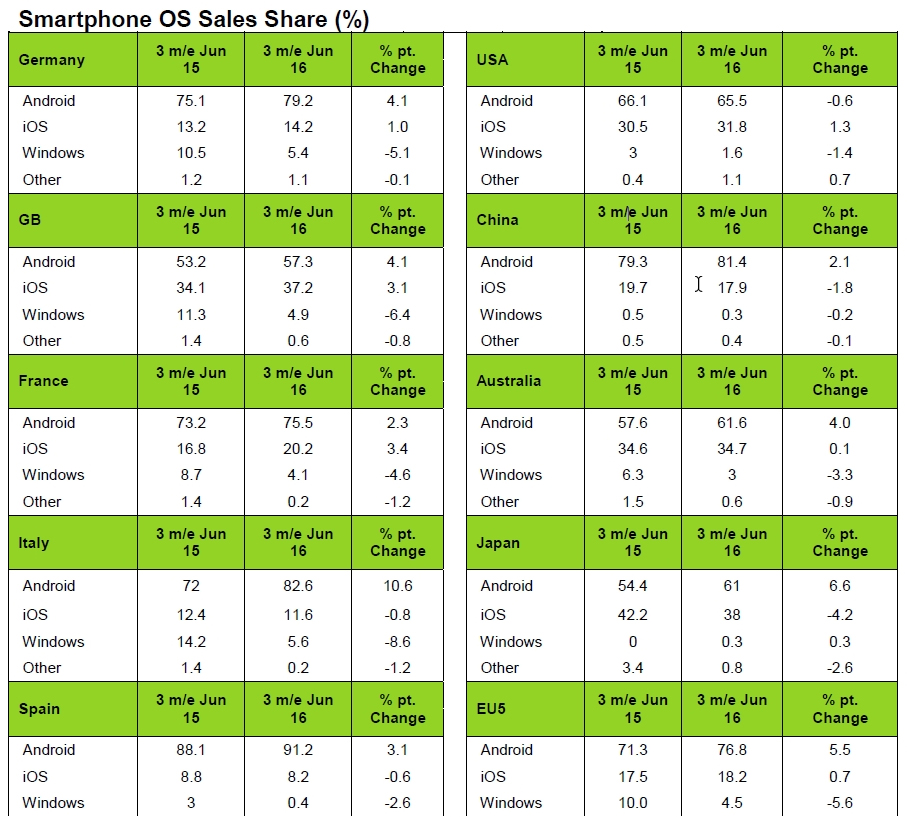 Perhaps surprisingly, Australia has seen an increase of 0.4%, capitalizing on some of Android’s decline, which has fallen almost 3% in that region. Market share has risen in Japan also, but this offset by a 0.3% decrease in China.

“Combined sales of the iPhone 6s/6s Plus totalled 15.1%, making this the top selling device in the quarter,” says Lauren Guenveur, Consumer Insight Director for Kantar, “The iPhone SE became the third best-selling phone at 5.1%, contributing to the overall growth of iOS during the period.”

Android accounted for 66.5% of smartphone sales in the US, still beating iOS by a large margin, but down from 66.1% last year. In Britain, it was the iPhone SE that was the most popular device:

“The iPhone SE was the top selling device in the quarter at 9.2%, followed by the iPhone 6s at 9.1%,” says Dominic Sunnebo, Business Unit Director for Kantar, “Together they contributed to iOS growth of 3.1 percentage points to 37.2% in the second quarter of 2016.”

If you want to take a look yourself, Kantar’s interactive data visualization is available on its website, or you download the press release here.