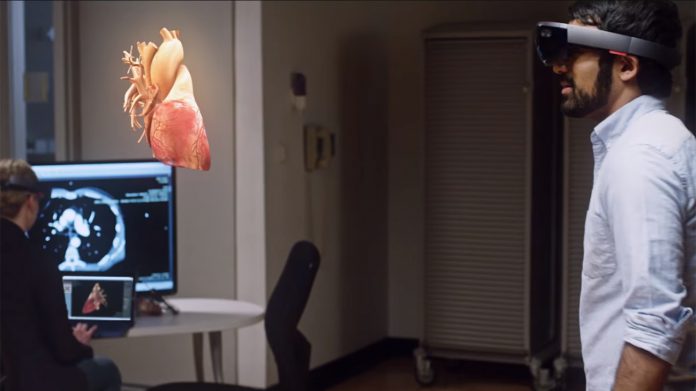 You might have seen HoloAnatomy in some of Microsoft’s promotional videos. Designed as an educational tool, it lets users explore Anatomy in mixed reality.

A three-dimensional body appears in real space, allowing users to look underneath the skin and see muscles, tendons, and organs. Each aspect of the human body is labeled and can be interacted with.

Case Western Reserve University and Cleveland Clinic are behind the design, and were the first to release a third party app for the device. The submission falls into the “Virtual Reality and Augmented Reality” category and is competing with Google and David Attenborough.

The mixed-reality aspect of the application gives it somewhat of a competitive edge, however. Students and teachers can see other as the body is interacted with in real-time, making it extremely valuable for education.

Sir David Attenborough’s submission is altogether different. The twenty minute, 360-degree film gives viewers a tour of the Great Barrier Reef. Sitting next to him and a team of experts, you explore the fish, corals, and sharks.

The project aired in the Natural History Museum in London and is now being showing at the Australian Museum in Sydney. Despite having Attenborough’s name attached to it, the film was produced by Alchemy VR, a small studio in London.

Google’s submission is Tilt Brush. Using the HTC Vive, it allows users to paint in 3D in virtual reality. Some of the artwork created so far is breathtaking, and probably look even better in VR.

The winners will be announced at the Harvard Art Museum in Boston on September 21st. All finalist’s entries will be shown at the Science Media Awards and Summit, which runs from 20-22 September at WGHB, Boston.

The contestants are all very strong, and it’s hard to guess who will win. Personally, though, I’m rooting for HoloAnatomy. The mixed reality experience has the ability to extend into other fields of education such as music and geography, making it truly revolutionary.

As executive director of visualization Erinn Henniger says, “The possibilities to transform learning are practically limitless.”