Since the Windows 10’s first update, Microsoft has offered thirty days to go back to a previous build. That has now changed with the Windows Anniversary Update. If you don’t like the build, you’d better roll back quickly, or it could be too late.

The difference was first noticed by Supersite for Windows, who notes that Microsoft has made no mention of it online. According to a Microsoft spokesperson, the changes aren’t to trick users into staying.

“Based on our user research, we noticed most users who choose to go back to a previous version of Windows do it within the first several days,” they told Supersite Windows, “As such, we changed the setting to 10 days to free storage space used by previous copies.” 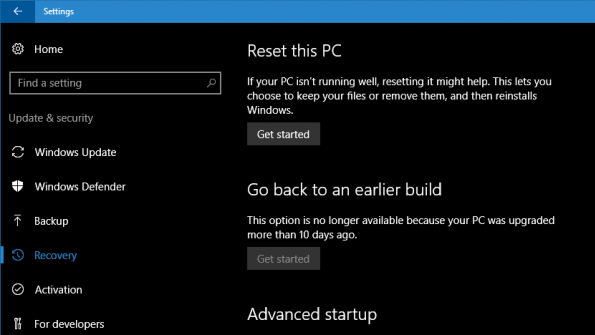 The research likely comes from Microsoft’s user data collection, which has come under fire recently. Though it makes sense, the timing of the change is questionable.

It’s hard to tell without Microsoft’s statistics, but we can only assume that some users would rather have a longer trial period. Storage is cheap – being stuck with an OS you don’t like is far more irritating.

It’s strange then, that Microsoft hasn’t offered users a choice in the matter. A simple ten or thirty-day choice following the update wouldn’t be too difficult to implement.

With some controversial changes to Windows 10 Pro, some admins may find a good reason to stay away from the update. However, with many running their OS from SSD’s, the extra 3-5GB of storage could be a welcome alternative to running Disk Cleanup.

How to Extend the Rollback Period

There is a way to extend the limit if you’d like to trial Windows Anniversary for a bit longer. First, you need to check that the option isn’t grayed out in Settings>Update & Security>Recovery.

One of the most simple ways to bypass Window’s deletion is to find the relevant files and change their name or move them.

Go to the drive your OS is on and you should see a folder named “Windows.old.” Change the name to have “backup” in front, and you should be good to go. If you want to revert, just change it back to the old name and hit the button in recovery.

Microsoft Plans yet More Changes to the Windows Update Cycle