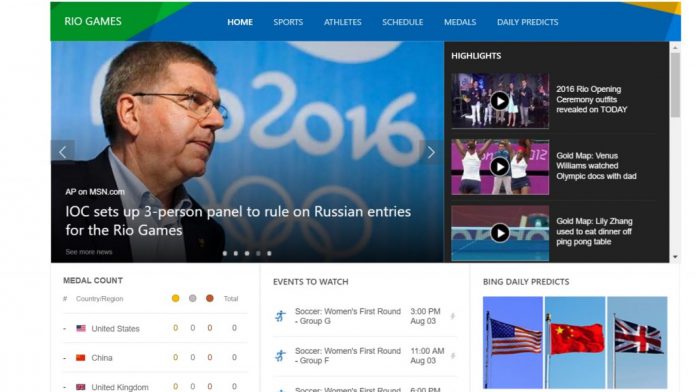 In past few years, Bing has used analytics to predict outcomes of major events around the world. The search engine will do the same for the summer Olympics, while also providing a TV guide.

Named “Events to Watch” the viewing schedule will update every day and suggest the most exciting events. As things heat up, medal outcomes will also be predicted.

The predictions use “traditional statistical models coupled with social listening and search analysis” and have been slightly hit and miss so far. Bing was 71% successful in predicting academy awards but failed on the outcomes of some NFL playoffs.

The digital assistant’s role in the Olympics is as expected – she will give games schedules, give information about athletes, and provide medal counts. She will also have some more advanced features, however.

Based on your previous questions, Cortana will deliver personal recommendations on what to watch. By saying “Hey Cortana, tell me what summer games event I should watch,” you can get access to the Bing prediction service mentioned earlier.

As usual, Cortana will also have several mini-games integrated. She will give you clues, and you have to guess correctly what athlete she’s “thinking” of. Facts and trivia will also be provided on request.

Microsoft has also announced that NBC Olympics has selected Azure to provide its on-demand streaming. The cloud service will provide cloud encoding and hosting, alongside video workflows.

Azure was used during the Sochi games in 2014, and Microsoft believes the number of viewers on the platform will go even higher this year:

“The Rio Olympics have nearly three times as many events per day as the Sochi Games,” said Rick Cordella, senior vice president and general manager, Digital Media, NBC Sports Group. “With the Azure cloud platform, Microsoft is partnering with us to deliver the secure, scalable cloud we depend on to bring the Games to millions of viewers on whichever device they prefer, via end-to-end live streaming entirely in the cloud.”

The Outlook Interesting calendar functionality will also tie into the games. Special additions will help you track the events without having to look up the details manually. The feature also extends to other sporting events and teams, and will continue to provide suggestions after the games are over.

The feature is available on Outlook.com and Outlook on the web, as well as Android and iOS. Only North American users can take advantage, however. You simply go to Add Calendar>Interesting calendar and select an event.

The Rio Olympic Games will run from 5th–21st August, and you can find more details about the changes on the Microsoft Blog.