It would be hard to forget Microsoft’s purchase of LinkedIn for $26.2 billion back in June. Since it’s been reported that it was Salesforce who pushed up the price, and there has been some speculation on how the deal will be financed. 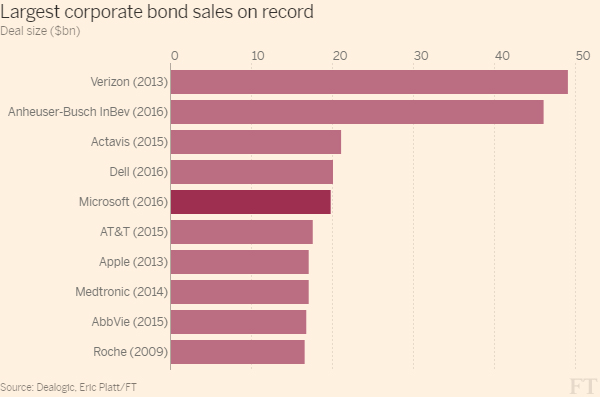 Barron’s has now reported that Microsoft sold $19.75 billion in bonds on Monday to fund the purchase. The deal marks the fifth largest bond sale in history.

According to Bloomberg, the bonds were extremely popular, and this helped them to borrow more cheaply than its $13 billion deal in October.

“You have the entire world looking for a place to put money, and when you compare Microsoft to negative yields, the tech company looks awfully attractive,” said Jon Cartwright, a senior corporate bond analyst at Ameriprise Financial.

The deal became two times oversubscribed in the primary market, and the 10-year maturity of the bonds reach 0.9% above U.S. Treasuries. A total of $50 billion in orders were put forward by investors, who Bloomberg say have been “clamoring for U.S. corporate debt in recent months.”

Credit rating provider Moody’s kept the company at AAA, but issued some words of warning:

“Based on the company’s domestic cash balances and expected capital allocation, Moody’s believes Microsoft may also raise debt to support future dividend and share buybacks such that gross debt could exceed $90 billion in fiscal 2017, up from $35 billion two years ago.”

The bond sale was managed by Bank of America Corp., JPMorgan Chase & Co., and Wells & Fargo Co. It has been generally considered as a good timing on Microsoft’s part, perhaps offsetting some of their shareholder’s worry over the acquisition.

LinkedIn Events to Debut This Month with Clubhouse-like Audio Feature

Steam Gets the China Treatment, Banned from the Country