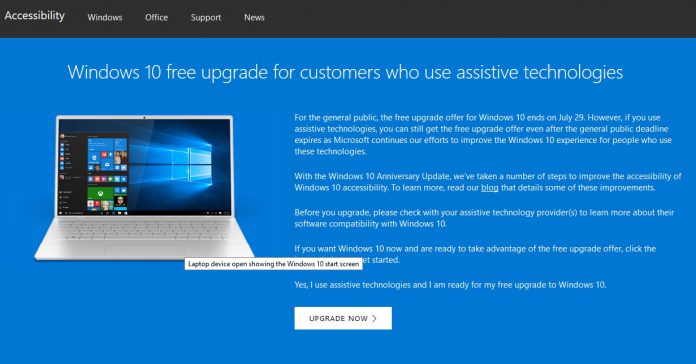 Microsoft brought the shut down on its free Windows 10 upgrade cycle last week (July 29). Those wanting to pick up the company’s platform will now have to pay for it. However, there is a loophole that means anyone can actually still download Windows 10 for free.

This means it is possible to download the EXE file from Microsoft and install Windows 10 for free. By doing so you are saying you use assistive technologies, but Microsoft is not verifying this with users. So, even if you do not use the assistive service, you can still grab the upgrade.

It seems to be the exact same upgrade tool as before, placing a Windows 10 digital license on the machine that downloads the EXE. We do not imagine Microsoft will keep this loophole open for long, so be quick if you are interested. The company has not said how long the free upgrade extension will last even if it does start verifying users.

If you do manage to get Windows 10 for free, you will do so at a good time. Microsoft is about to launch the Anniversary Update on Tuesday (August 2). The huge upgrade will bring a slew of new features to the platform and extend Microsoft’s Universal Windows Platform plans.

Microsoft was heavily criticized for the way it was placing Windows 10 onto machines. The free upgrade program was commendable, but the company was accused of forcing the new build onto PCs. Lawsuits and criticisms of Microsoft’s policy mirroring malware practices followed.