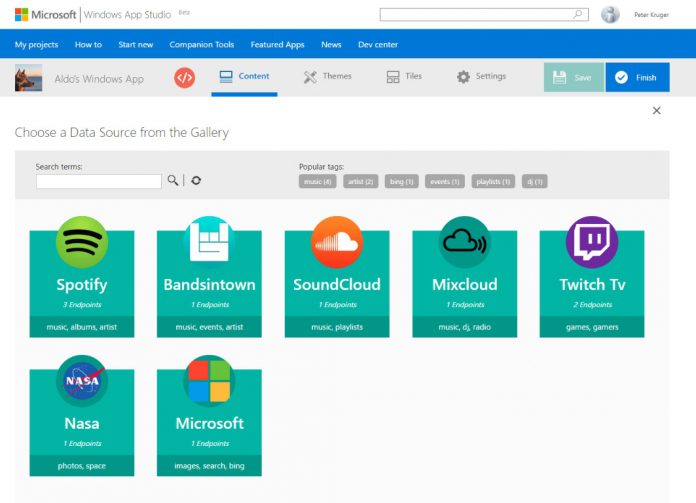 Microsoft has just released an impactful update to the Windows App Studio. This month’s release includes most-voted items such as a collections limit increase and favourites in pivot apps as well as new features such as API gallery and custom API sharing that powers it.

According to Microsoft, API gallery is a new data source that builds upon REST API Data Source and decreases complexity.

“When you submit it, you can specify which elements are customizable by the user (things like choosing the location or type of events), provide a description, and add a link to API docs. When you’re finished and click “Send to Validate”, someone on our team will see the new submission, verify it, and then release it to the API Gallery.”

Once validated and accepted into the library, anyone can easily add that API implementation into their apps. This is incredibly powerful and will only get more comprehensive over time.

In the previous release, Microsoft added a new data source for generic REST API support. It is powerful, but a little in-depth for new developers. This release will have a huge impact on Windows App Studio-created apps. The REST API features are already inspiring new ideas to improve Windows App Studio.

Microsoft has some exciting things in the works for Windows App Studio. The company will introduce new and improved experiences for bringing content to Windows apps.

You can get Windows App Studio here.