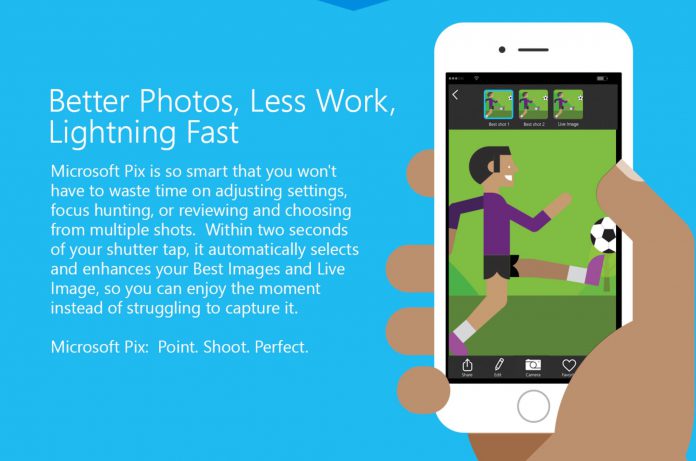 Microsoft has announced a new photo service for iOS devices today. Users can now download Microsoft Pix through the iTunes store or App Store. The app was first spotted a couple of weeks ago, but it has now been launched in an official capacity. Pix is a Microsoft Research project that replaces the standard Camera app on iOS.

The main function behind Microsoft Pix is the ability to automatically improve photos and create live images. To do this, the app uses artificial intelligence. Sure, iOS already has a similar Live images feature, but Pix brings image stabilization to the party. The service also makes it easier to convert normal videos into Hyperlapse videos.

Pix is now available to get on the App Store on your device or iTunes on your PC. This is how Microsoft describes the app on the official page:

“Take better photos without extra effort! Microsoft Pix has serious intelligence behind the lens, so it can automatically tweak settings for each shot, and immediately enhance your photos, to help people and scenes look their best. Now you can just enjoy the moment, instead of struggling to capture it! Point. Shoot. Perfect.”

To achieve the best possible image, Pix is simply always snapping. The traditional shutter action is just telling the app which particular frame you want. Even avid smartphone photographers are not in full control of the shutter. To compensate, Pix will take 10 frames around the time the shutter was exposed. This allows the app to select the best frame image from your preferred choice.

Live image creates a looping video a few seconds long. This is achieved by stitching frames together from a burst. Pix will only do this when there is motion in the shot, Microsoft says this saves phone memory.