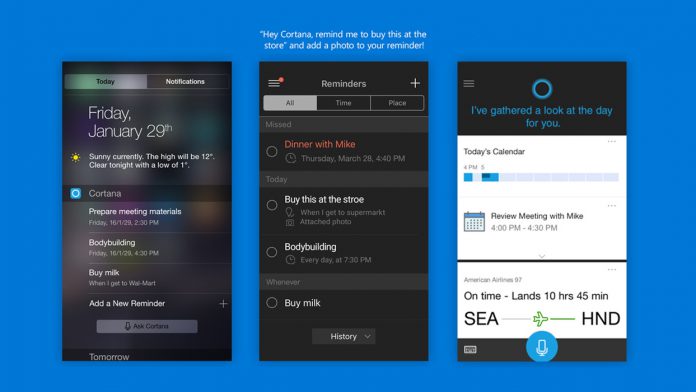 Microsoft’s Cortana app for iOS is now at version 1.9.5, with a couple of new features that could have a significant impact. The update adds improvements that have yet to release on Windows 10 Mobile.

The ability to add photo reminders made it into Windows Preview build 14322 but has not been available to the general public until now. iOS users can take advantage of the feature by updating to the latest version.

The App store offers further detail on the change, as well as the other improvement:

– Now you can add a photo to a reminder. Try “Hey Cortana, remind me to pick this up at the store” and add your photo.
– Cortana can remember what you tell her and recall it on demand, across all your devices.”

The ability for Cortana to remember what users say to her is a fairly major improvement. Windows 10 users will now benefit from the digital assistants’ knowledge of what they asked for on their iPhone.

In July, Cortana for iOS was given the ability to remember where a car is parked. The location data is taken automatically, but users have to give the assistant the go ahead before she retains the information.

Its combination with the latest update will mean you can ask your desktop for the information when the Windows 10 Anniversary Update drops on August 2nd.

To get the most recent improvements, you can download the 1.9.5 update from the App Store.