Audio, video, and messaging service Viber has left Viber and is now available to users across Windows 10. The app comes with Cortana support and group messaging with up to 200 contacts.

A month after Viber arrived as a Windows 10 beta, the app has now been made widely available on the Windows Store. All users running Windows 10 can get the full version of the app right now. This is a Universal Windows Platform (UWP) app, so you can download it on any Windows 10 device.

Some of the new features arriving on Viber include Cortana support and video calls on mobile devices. The app is available on the Windows Store on Windows 10 and Windows 10 Mobile. 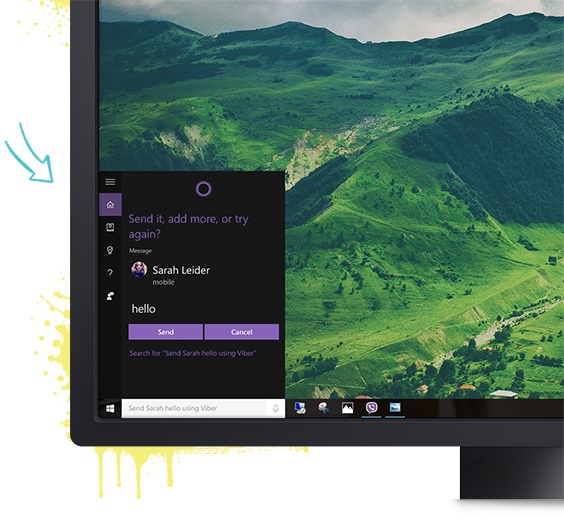 Viber is a free app that gives users tools to send messages and make HD audio and video calls. Using Wi-Fi and mobile data, Viber works similarly to Microsoft’s own Skype service. The app features the ability to share content such as video, voice, messages and photos in message groups of up to 200 contacts.

“Video calls on mobile: Now you can video-call anyone from your phone!

Quick reply: Your messages will pop up outside of the app so that you can reply quickly, without opening up the app, and get on with whatever you’re doing.

Cortana support: Simply ask Cortana with your voice to call or text someone for you.

Share to Viber: Share links, text, photos, videos or your location to Viber easily from within any Windows 10 app.

Access chats from Start menu: Start a new message or reply in recent chats right from the Start menu.

Organize stickers: Hide and change the display order of your stickers through the Sticker Market settings.

Localization: New language support for both Russian and Portuguese

Live Tile: The Live Tile in Windows 10 will show you your new messages

On its own blog, Viber says Cortana integration means users can make calls “start to finish” with their voices. The company also details all of the features Windows 10 and Windows 10 Mobile can look forward to.

Will you be downloading the Viber app?