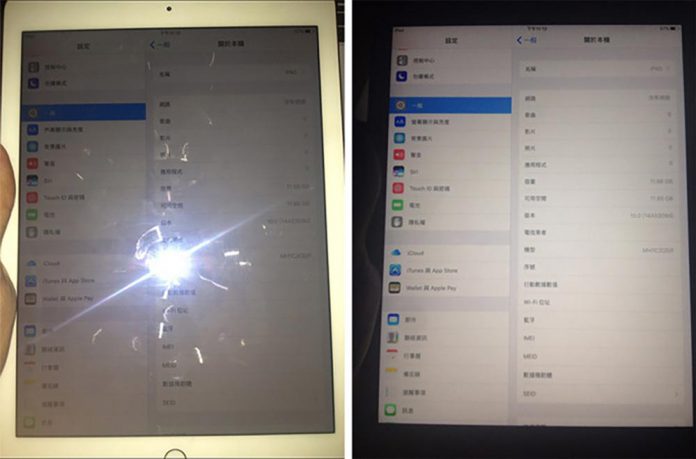 Rumors about an iPad Pro 2 have not been in abundance since last year, but now a set of leaked images give the existing claims slightly more weight. Identified as model number MH1C2CD/F, the device seems to be of a new line, though there is no way this can be confirmed.

As Apple Insider points out, the numbering convention does follow previous iPad Pro models. This does not add much weight to the claim, however. Model numbers can be easily manipulated, so it’s possible someone is just trying to create hype over nothing.

The photographs don’t offer a lot of information about the new model, though they do add some credibility to the claim. The device has 12GB of storage, which suggests a test model, and is running on the latest iOS 10 beta.

As with the model number, however, these specifications could be easily faked. Visually, the device doesn’t quite look 12.9″ when compared to the size of the user’s hand. Disappointingly, the design looks the same as current devices, which means it could just be a modded existing version.

With hope, the iPad Pro 2 will house a faster AX10 processor, as well as 9.7-inch iPad Pro’s True Tone display. It will almost certainly run on iOS 10, and will likely have better cameras. It’s strange that the source has not offered any insight into this, instead opting to show only the settings page.

Personally, I would most like to see a bigger battery on the new device. With such a large screen and powerful processor, the original model drains quite quickly, and the aforementioned upgrades would only add to this. More storage would be nice on such a daily driver, though I’ve never had any problems with 128GB.

We will update you with more details on the iPad Pro 2 as time goes on. In the meantime, we’d be interested to hear what you think of the images. Do they fit with your vision of the new device?

The provided images are sourced from Apple Insider.