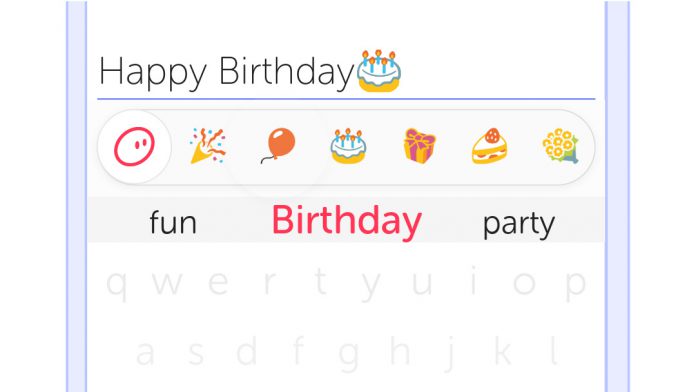 Since Microsoft’s acquisition of Switfkey in February, the company has done little with the brand. The tech giant paid $250 million for the app and has since released only a few updates.

This was unsurprising given Microsoft’s statement that it was mostly interested in artificial intelligence algorithms, but now the company has revealed an entirely new app. Swiftmoji uses the intelligent AI from SwiftKey to suggest a series of emoticons after text.

Though the regular SwiftKey keyboard suggests emotions, it only does it on an individual level. Swiftmoji suggests multiple emoticons that can be used to portray whole phrases or sentences. It integrates trending topics to ensure predictions remain relevant and humorous.

The application is only available in English at the moment and on iOS only inserts emojis rather than replacing the keyboard. It’s hard to imagine the application becoming life-changing, but with ten thousand Android downloads already, it’s clearly popular.

I switched from the original SwiftKey to the app and was pleasantly surprised. The stock design is very minimal and clean, and I prefer it over the theme I bought for the original. It still maintains the same prediction functionality, with the added bonus of the emoji bar at the top.

Initially, it didn’t look like my cloud data synced over, as statistics did not show in the interface. This seemed strange, as there is specific data on the most used emoticons. After beginning to type some of my more commonly used phrases, however, I noticed that it was picking up things I had typed in the past.

If you use emoji’s regularly it seems there’s little reason not to download the new application. Given that English is your first language there don’t seem to be any missing features, and the emoji bar does save a lot of searching around.

Swiftmoji is available on the Play Store and App Store now.