We are still ahead of the Windows 10 Anniversary Update arriving and integrating Bash and Linux to Windows 10. However, before that August 2 roll out, some users are already starting to show the Windows Subsystem for Linux to work.Notably,

Notably, one Redditor has shown how they got dbus and X Server working on the platform.

Of course, while end users wait for the Anniversary Update, Windows Insiders have had Ubuntu supporting features for a while. ShaRose has shown on Reddit that it is possible to use x server applications on Windows 10, even if they require dbus.

While Windows 10 will support X server apps, it does no support apps that require dbus, which is a lot of them. ShaRose says the result of trying is the app crashing at launch or shortly after.

Wanting to get virt-manager running on Windows 10 to avoid using a virtual machine, ShaRose found that getting the dbus app running required just three steps:

Wanting to get virt-manager running on Windows 10 to avoid using a virtual machine, ShaRose found that getting the dbus app running required just three steps:

“1) install an X server. vcxsrv and Xming are confirmed to both work just fine.

2) add DISPLAY=:0.0 to your bashrc: you can do this by executing the following command

3) Now we need to fix dbus: The issue with this was that by default, dbus uses unix sockets to communication, which windows bash at the moment doesn’t support. So we just need to tell it to use tcp. In /etc/dbus-1/session.conf, you need to replace <listen>unix:tmpdir=/tmp</listen> with <listen>tcp:host=localhost,port=0</listen> and then you are done. Note this file needs root to edit. An easy way to do this is to execute the following:

After completing this process ShaRose says that restarting Bash will get dbus applictaions working. Another Redditor called HeyHeyitsJoeWay showed a screenshot (main image) of the Windows Subsystem for Linux running and said it worked smoothly.

At the beginning of the month, a video release on Scott Hanselman’s blog already showed Linux and Bash running on Windows 10 Anniversary Update. The Microsoft employee showed how this will be achieved by end users in a few weeks’ time. 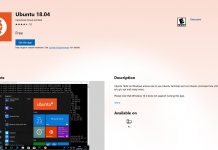 Ubuntu 18.04 LTS Is Now Available via the Microsoft Store