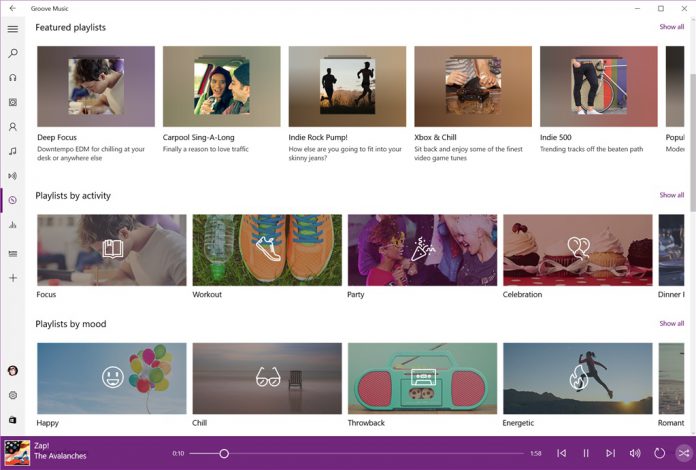 Microsoft has taken a big step towards making Groove Music a viable competitor to music streaming rivals. The company’s latest update for the service is substantial. A range of new features have been added to the service. The update has now been issued to all Windows 10 users, bringing Groove closer to Spotify and Apple Music.

The features included in this upgrade were rolled out last month as a preview to Windows Insiders on the Fast Ring. Later Insiders on the Slow and Release Preview rings received the update, and now all Windows 10 users get it. In a blog post to announce the features, Microsoft’s Ellen Kilbourne said the update is based on feedback.

“[We] listened to your feedback telling us you want more discovery features in the app, and we’ve tried to make it a lot easier to find music you love“.

One of the new features is geared toward Groove Music Pass subscribers. Microsoft has expanded the amount of playlists found in the Explore pane, with content curated “by our own Groove editorial team.” These playlists match certain moods or settings. For example, a user can select between Dinner, Driving, Romantic, Rage, and more. Music will reflect the mood or setting selected.

At the moment the new Explore pane is limited to the US, UK, Germany, France, and Canada for Windows 10. Microsoft says it will expand the feature to other regions and devices if it proves successful.

As we mentioned last month with the Insider release, another feature called Your Groove is also included in the update.

“Introducing Your Groove, the place for music that is centered around you, what you like, and your listening habits. This is where you’ll not only find your recently played items, but also brand new automatically curated recommended playlists built just for your taste. They update often to always give you fresh recommendations, but you can save a copy any time to edit, download or just save to listen to later.”

The update also comes with other changes to Groove Music. Here is the complete changelog from Microsoft: