According to Moto G3, the smartphone spotted on the Wi-Fi certification website does not reveal much except its model number VPU051C11N and basic Wi-Fi information. It’s a high or probably a mid-end device with 5 GHz of Wi-Fi frequency as well as Wi-Fi AC.

Though there’s no official confirmation, some speculators insist that this could be the global version of VAIO Phone Biz. Recent Bluetooth SIG certification from the company tipped a mysterious phone with model VPB0511S, while this one is VPU051C11N. 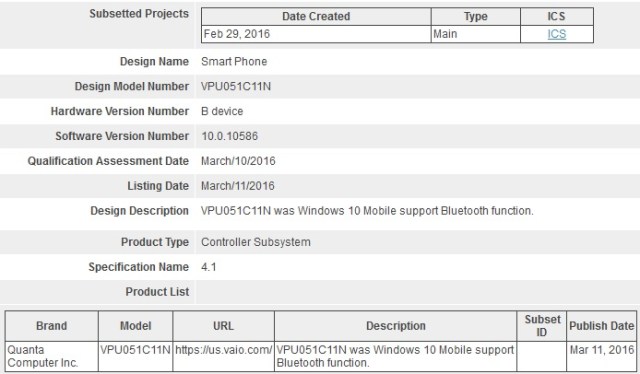 The 5.5-incher VAIO Phone Biz is still not available the United States, but its top-notch specs got everyone interested. It runs Windows 10 Mobile with 3GB RAM, Snapdragon 617, Adreno 405, and a big 2800 mAh battery.

Soon after its announcement, VAIO confirmed via Twitter that the handset is not coming to the US, at least in the near future.

But this is not the first time we are seeing a VAIO phone with different numbers. Last year another VAIO device called Quanta MTP8952 was spotted in benchmarks and tests. According to GFX Benchmarks, it was smaller than Phone Biz with a 4.7-inch display on offer.

The information from Wi-Fi Certification leaves an opening for various possibilities for the phone. It could be Phone Biz or Quanta or a totally new Windows 10 based smartphone. The documentation was spotted today which means the new phone or Phone Biz variant could be revealed soon. Now it only needs to pass the FCC tests before actually hitting the shelves.