Skype has teased that it is preparing a new Skype for Linux version. The Microsoft-owned service published a blog simply titled “Exciting news for Linux users”. The post urges customers to Tune into the Skype Community Q&A on July 13 when the “exciting” news will be dropped.

While the company hasn’t dropped anything official, our crystal ball tells us an improved Skype Linux experience is coming. This is firmly a rumor at the moment, but Microsoft could certainly win plenty of Linux fans by churning out a new Skype version for the platform.

This will come as excellent new to Linux users. Microsoft’s Skype build for the open source platform has been unsupported and derided by users. Indeed, it has not been updated since June 2014 and Microsoft all but pulled the plug on the service without telling users. 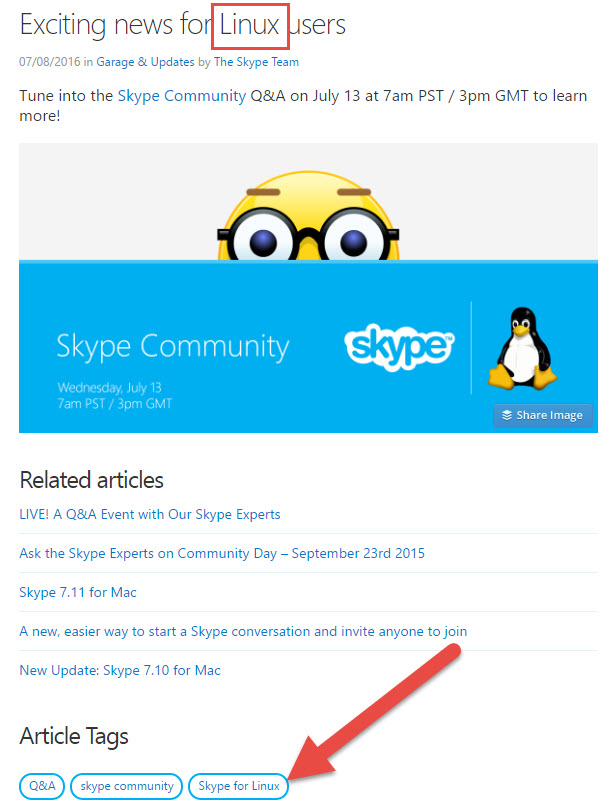 To begin with, Skype for Linux was pretty useless anyway. Next to other Skype version and rival services, it severely lacked features. Since Microsoft stopped supporting the service, it has basically fallen apart and the little features available have become useless. In other words, Skype for Linux has been broken.

Too Little Too Late?

Users have reported a general decay in the feature set, with even basic voice calling not working for some. Other features have stopped working entirely, and the frustrating thing is Microsoft did not explain why it decided to stop supporting the service. The official Skype for Linux page is still asking for Skype 4.3 requirements, a build that was launched two years ago.

Two separate user petitions have been started, each pleas with Microsoft to stop ignoring Skype Linux. A petition created on change.org stated that Linux users have been “left on the curb” by Microsoft. One petition started on nickforall states that since Microsoft took over Skype, the service has become a “pain” on Linux:

“We do understand that Linux is a competitor of Microsoft’s Windows. But we do not understand why this results in a lack of support for Skype.”

Microsoft said that it wants to embrace other platforms, and for the most part has backed that up with actions. The company embraced iOS and Android for example, and at the moment is engaged in a full on love-in with Linux.

The company is going with the Microsoft Loves Linux branding and has already announced SQL Server 2016 Red Hat enterprise distribution. Redmond has also made it possible to run Linux GUI applications on its own Windows 10 platform.

However, it seems that it could be a case of too little too late. We took to Reddit to gauge the Linux community’s reaction to this tease. This quote sums up the general feeling:

Once enemies, the days of Microsoft seeing Linux as an undeserving upstart are long gone. The company has already started embracing the platform, so improving (read fixing) the Skype experience on Linux is logical.

Microsoft Skype Test: Can You Solve the Puzzle 10 times to Use the Service?