Cybersecurity firm Kaspersky Lab has revealed that it found a malware attack that exploited around 10,000 Facebook accounts, tricking them into giving access. The company says those running Microsoft Windows PCs were the most at risk and data shows that the attack was carried out on a global level.

A security expert working for Kaspersky Lab found that users were tricked into accepting the malware by a message that pretended to be from a friend. Once one account was exploited, the malware could spread and infect other accounts through the friend networks from the original victim.

The attack occurred between June 24th and 27th of this year, and the company shows (below) that Latin American countries were the worst hit, although nations on all continents had infections. In a post announcing the attack, Kaspersky Lab says users were tricked by a message that was made to look like it came from a Facebook page saying they had mentioned them in a comment. 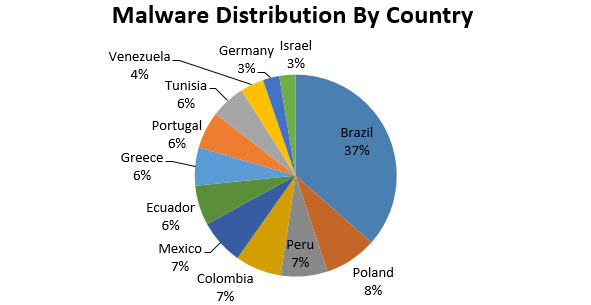 “The message had in fact been initiated by attackers and unleashed a two-stage attack.  The first stage downloaded a Trojan onto the user’s computer that installed, among other things, a malicious Chrome browser extension. This enabled the second stage, the takeover of the victim’s Facebook account when they logged back into Facebook through the compromised browser.”

Once the malware was initiated, attackers could take control of an account and change privacy settings and steal data. The spread of the infection through other users resulted in malicious activity such as creating false “likes” on Facebook, spamming pages, and even identity theft.

Kaspersky points out that the Trojan used to initiate the attack is not new, and has been used for similar activities as far back as a year ago. The company adds that Microsoft’s Windows platform was the most vulnerable, while the Windows phone platform was also vulnerable. Android and iOS users were not affected due to the malware not being compatible with the platforms.

Nearly 10,000 malware attempts were made around the world, with Brazil easily the worst effected, suggesting users in that country are not protecting themselves adequately. However, few were untouched, with Peru, Colombia, Poland, Ecuador, Mexico, Portugal, Tunisia, Greece, Venezuela, Israel, and Germany amongst the worst affected.