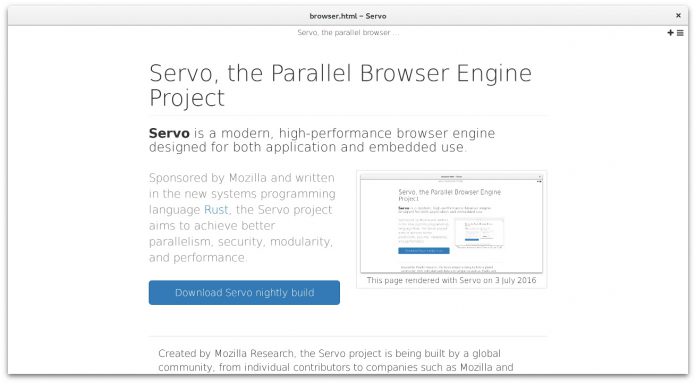 While Mozilla’s Servo web browser is a long way from replacing Firefox, the company is working on preparing it for that eventuality. The open source company has now started publishing nightly builds the Servo browser engine, allowing anyone to check in to see how the project is progressing.

At the moment, Servo is still at the experimental stage of its development, but it is possible to keep track of Mozilla’s progress through executables for macOS and GNU/Linux. The company says even non-developers can take a look, while devs are able to contribute by taking the open source code, changing it, improving it, and fixing any bugs.

Servo is hardly the complete browser it could be one day if it replaces Firefox, but is instead a rather simple HTML interface.

It is worth noting that while Servo could be Mozilla’s eventual browser engine, it is not clear if the company would replace the Firefox name. In fact, considering the branding, it is unlikely and instead Servo will simply replace Firefox’s Gecko engine.

As for Servo in its current state, it is hard to really describe it as a web browser as it is more of a proof of concept or a demo. It is written using Rust, which is Mozilla’s most secure programming language, which has limits in place for programmers to stop them making easy mistakes that could lead to security exploits.

Some may find Rust restrictive in this sense, it will literally shut a programmer down if it thinks malicious code is present, but Mozilla is adamant this is the best way to achieve a secure engine.

Rust is also designed to allow speedy use, while Mozilla says it is a language that is for experienced programmers and not people trying coding as a novice.

The company adds that while the daily Servo builds are only available for macOS and Linux at the moment, they will soon be rolled out for Windows and Android too.