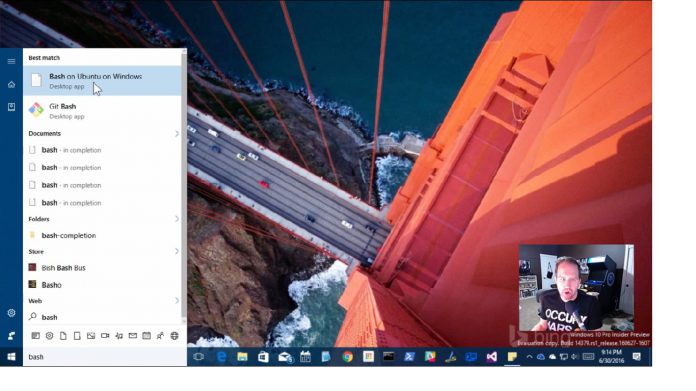 Microsoft has been embracing the Linux platform this year, announcing the release of SQL Server on the open source in March. The company will also be tying Linux and Windows 10 closer together with the Anniversary Update on August 2. Microsoft employee, Scott Hanselman has released a video showing how Linux and Bask will run on Windows 10.

Hanselman released the clip on his own blog, where he also stated he would prefer that Anniversary Update to actually be called Windows 10.1. Either way, he discusses the running of Linux Subsystem for Windows or “Bash on Windows” describing the results as “spectacular.”

“I went and recorded a 20 min video screencast showing what you need to do to enable and some cool stuff that just scratches the surface of this new feature. Personally, I love that I can develop with Rails on Windows and it actually works and isn’t a second class citizen. If you’re a developer of any kind this opens up a whole world where you can develop for Windows and Linux without compromise and without the weight of a VM.”

Using his Insider preview build (all Insiders can access Bash on Windows), he starts with Windows Subsystem for Linux, which prompts a reboot. Through the Bash (Ubuntu) console which downloads Linux from the Windows Store.

From there Hanselman walks through how Bash for Ubuntu for Windows 10 works, showing how to run Bash scripts and shell commands. Linux on Windows 10 will also run Linux first tools and apps and services that have never been available on Windows before.

Bask on Ubuntu on Windows 10 will be available for all end users alongside the Anniversary Update, which Microsoft revealed will be landing on August 2. Basic shell commands will appeal, but developers will also be able to take advantage of a full Linux deployment, which Hanselman says runs 99% as fast as it should.

If you are interested in this, chances are you already signed up for the Windows Insider Program and tested it out, but still it is nice to know it will be officially coming to Windows 10 next month.