Office 365 continues to be a major contributor to Microsoft’s business as a whole, and it remains the number one productivity suite on the market. Indeed, according to a report from cloud compliance company Skyhigh Networks, Office 365 has enjoyed massive market growth over the last two years, and especially over the last 9 months.

Microsoft’s Office productivity suite has long been the go to choice for, well just about everyone. While Google Docs is enjoying some limelight on mobile, just about everywhere else it is all about Office. In the cloud, that means Office 365, Redmond’s cloud-based version of the suite.

Skyhigh Networks says that Office 365 has grown substantially in the last 9 months, moving from 6.8% of corporate employees to 22.3%. The company analyzed 27 million employees and found that 91.4% of all companies have 100 or more workers using Office 365, with OneDrive the most used application with a 79.1% penetration rate over 100 users. 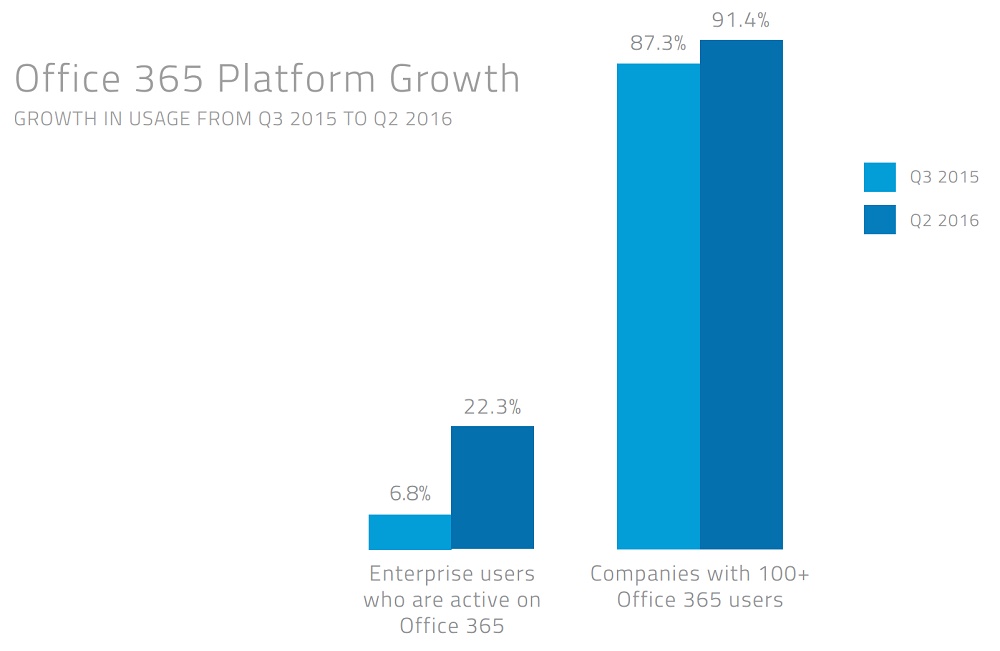 The significant rise means the service is generating 80% more revenue than the Office single suite purchase Microsoft also offers. In other words, the cloud-based Office has become a huge business for Redmond.

Exchange has the second highest penetration rate with 66.9% over 100 users, while Skype for Business is finding success with single users more than with enterprises.

“Microsoft has been successful in gaining an Office 365 foothold in nearly every enterprise. In the previous 9 months, the percentage of enterprises with at least 100 users increased slightly from 87.3 to 91.4 percent. However, usage within enterprises grew over 320% as the percentage of employees using at least one Office 365 application more than tripled from 6.8 to 22.3 percent. That’s good news for Microsoft.”

It is perhaps of little surprise the Office 365 is starting to thrive, coinciding with Microsoft’s overall growth in the cloud market. CEO Satya Nadella took the helm two years ago and repositioned Microsoft as a mobile first, cloud first company, and this is clearly a strategy that is consistently paying off.