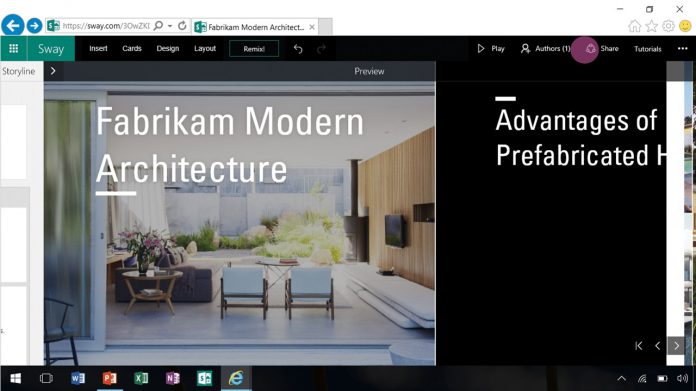 Sway is Microsoft’s storytelling software, which was released as a preview in October 2014 before being launched in August 2015, and is now getting an update. Office 365 subscribers and Sway users now have three new features, with Microsoft bolstering security for the software.

We discussed Sway last year when it launched:

“Sway is a publishing tool which is aimed to help creating semi-professional designs in an easy way. The app has been released in August 2015 after a ten months preview period where users shared input to improve its usability.

In presentations done with Sway users add raw content, which Sway’s design engine transforms into a polished, cohesive layout where images, text, videos and other media flow together.”

The new features are similar to Microsoft’s recent efforts to add extra layers of security to its Office apps like Word, Excel, and PowerPoint. Password protection, enhanced content limits and the ability to remove Sway branding from creations give users more control over security features on the software.

Password protection is likely to appeal to customers because it gives the ability to issue passwords on a sort of need to know basis. Essentially, it is possible to give passwords only to users who need to see the content in Question.

Microsoft has not solely focused on security with this update, with the company also expanding the content limits afforded to users. Sway customers have been asking for more room for text, images, and other content types, and Redmond responded with a longer story allowance, giving users more content room.

While the ability to remove the Sway branding from content may seem a rather meaningless addition, it is actually important. It allows content creations to look more professional, without any additional footer data or branding.

An official blog announcing the changes says that all the new features are available now, with the Windows 10 app getting updated in the coming months. Sway is also available as an iOS application, but there is no word on when these features will arrive on that version.