This year we have seen the Windows Phone platform slip in a worrying trend, especially in key markets like Europe and the United States. Whether the decline is terminal remains to be seen, but Microsoft has all but pulled out of the hardware market in the mobile space, so where the successful Windows 10 Mobile devices will come from is anybody’s guess.

Market researcher Kantar has revealed that Windows Phone’s decline has been Android’s gain, as 10% of all new customers buying Android devices in April have come from Windows.

“Android’s gains continued in several regions including the EU5, US, and China, but the rate of growth has slowed,” said Lauren Guenveur, Consumer Insight Director for Kantar Worldpanel ComTech. “In the EU5, year-on-year growth between March 2015 and 2016 was 7.1%. For the April-to-April time frame, that number dropped to 5.8% pts. What’s more, we see only a 0.4 percentage point increase for the three months ending March 2016, up from 75.6% to 76%.” 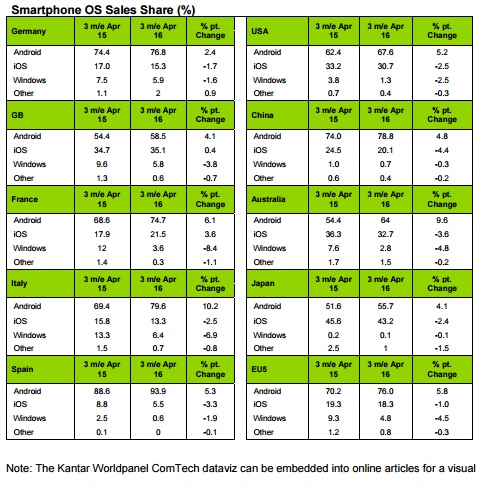 April proved to be another torrid month for the Windows mobile platform, highlighted by performance in the USA, Microsoft’s homeland. Windows phone sales dipped to a new low in the country, accounting for just 1.3% of the market, a sizeable 2.5% dip from a year ago.

Perhaps Microsoft’s reasons for all but leaving the mobile hardware market become clearer when looking at the EU5 nations (Spain, Italy, France, Germany, and the UK) through April. Numbers from France are alarming, where in the space of 12 months Windows Phone sales have fallen from 12% to just 3.6% of overall device sales through April 2016.

Even traditionally strong markets for Windows Phone are lagging. In Italy, Windows smartphone sales are now at 6.9% from 13.3% in April 2015 but is still a solid seller with 6.4% of the market. It is a similar story in the UK where the platform remains a decent performer with 5.8% sales through the month, but that is down from 9.6% year-on-year.

Kantar’s figures come out the same week as a report from research firm IC Insights, which stated that Microsoft is no longer in the top 12 best-selling smartphone brands. India’s Micromax and China’s Meizu and TCL have no surpassed sales of Microsoft’s Lumia handsets, which stood at 2.3 million units through the first quarter.

UPDATE: Yes, we messed up. Thanks for the comments pointing out the mistake, we have now made the neccesary changes.