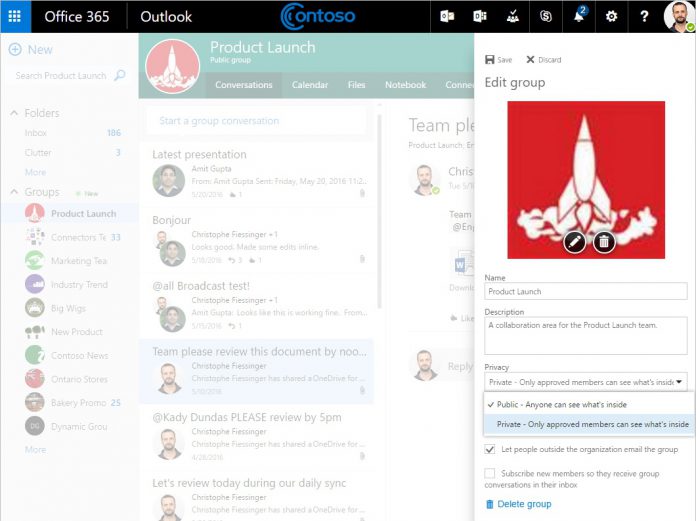 This is quite an extensive update with a number of new features and UI functionality added to the Groups mix. One of the main new additions to the service is the ability to update privacy type, allowing admins to change their preferred privacy setting from private to public, or vice versa. This is achieved by editing the properties of the group within Outlook on the web.

Office 365 Groups is also getting multi-domain support in the June update, which means companies can now set up multiple domains to reflect different parts of their business.

Microsoft also discussed some of the features that will be making their way to the service in the July update next month. Some of the things to look forward to include a Creation policy in Azure Active Directory and mobile application support.

On top of this, Redmond has also issued a wider roadmap that offers some features that will be rolling out in updates as the year progresses.

Ability to update privacy type—When you create an Office 365 group, users have two privacy options: public (anyone within your organization can access the group’s content) and private (only approved members can access the group’s content). This update enables group owners to change the privacy setting from public to private or vice versa by editing the group properties in Outlook on the web. Administrators can also leverage the Set-UnifiedGroup cmdlets to change the privacy type. Read “Make Office 365 groups public or private” for more information.

Multi-domain support—Larger organizations use separate email domains to reflect different parts of their businesses. Office 365 groups that are created by users in one domain will share that domain (as opposed to using a common domain across the tenant). Administrators now also have control to create groups in specific domains of their choosing. Read “Multi-domain support for Office 365 Groups” for more information.

Microsoft has also started rolling out the following functionality to be deployed by the end of July:

Usage guidelines—You’ll be able to define usage guidelines for Office 365 Groups—to educate your users about best practices that help keep their groups effective and educate them on internal content policies.

Data classification and extensible policy—You’ll be able to create a customizable data classification system for Office 365 Groups that allows separation of groups by policy type (e.g., “unclassified,” “corporate confidential” or “top secret”). In this manner, your groups can exhibit the policies of other content in your organization. Extensible policy allows your organization to configure an endpoint that is called whenever a group is created or changed—and you can then implement your own policies for group creation or change.

The following features are due in future updates:

Naming policy in Azure Active Directory—Administrators will be able to configure a policy for appending text to the beginning or end of a group’s name and email address no matter where the group is created (e.g., Outlook, Planner, Power BI, etc.). Administrators can also configure a list of specific blocked words that can’t be used in group names and also rely on the native list of thousands of blocked words to keep their directories clean.

Ability to search for private Groups files—By integrating Groups files (stored in a SharePoint document library and surfaced in OneDrive for Business) and Office Delve, users will be able to search content from both public and private groups as long as they’re a member.

In H2 2016 Microsoft is bringing the following:

The ability to add external members to a group
A SharePoint team site for every group
Integration of Yammer groups with the Office 365 Groups service.